By DON PHIPPS
December 3, 2019
Sign in to view read count 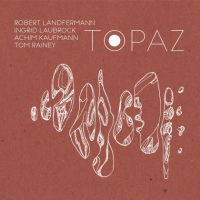 A brilliant tour de force, Robert Landfermann's Topaz is helped in no small part by the amazing contributions of the quartet Landfermann assembled for this session. It is clear he prefers spontaneous improvisation over formal structures. The key to such an approach relies on the ability of the musicians to both listen to one another and mirror each other's music as the improvisation develops emotionally and contextually in space time.

Landfermann is joined on the album by reed player Ingrid Laubrock, pianist Achim Kaufmann, and drummer Tom Rainey. The compositions are credited to all four performers and the album shows the influence of Anthony Braxton, one of the pioneering giants of avant-garde music.

The playing is expressive and abstract, yet all of it is fortified by the technical virtuosity of the players. As exhibit A, take saxophonist Ingrid Laubrock's blistering (angry?) triple tonguing of single notes on "Gloster," her pinched reed on "Goldparmane," or her whistling effects on "Calville." On "Pariner," she creates phrases that alternate between extended runs and full-bodied expression. Like Braxton, she can pop the reed with her tongue, and she will sometimes use long legato notes in the lower register to create foghorn expressions.

Pianist Kaufmann adds dits and dots and atmospherics. Listen to how he uses the lower part of the piano registers on "Goldparmane" and his "inside the piano" playing on "Calville." And on "Alkmene," he entertains with a touch of beautiful classicism with fingers that sprinkle lightly on the keys.

Drummer Rainey uses his technique for color and emphasis, and his snare playing is loose and flowing. Of interest is his use of the drum rims, which brings punctuation and clarity to many of the phrases. And on "Pariner" he offers up fascinating work on the bass drum.

Not to be outdone, bassist Landfermann uses his bow to create an eerie bottom or scraping effects on "Calville," "Alkmene" and "Renette." He also adds his own up and down fingerings on the bass to produce a variety of colors and timbres. His technique serves to underpin many of the cerebral, moody, and disturbing sounds of the compositions.

Landfermann's Topaz is a textbook example of how spontaneous improvisations can create music that is not only cerebral, but emotionally rich and psychologically complex. Adventurous in a "through the looking-glass" kind of way, this noteworthy album deserves to be heard.