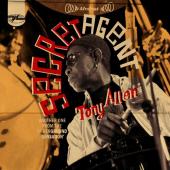 It's been a good six months for Afrobeat, the turbulent jazz meets funk meets West African roots music associated with the Nigerian singer Fela Anikulapo Kuti (1938 - 1997) and his bands Afrika 70 and Egypt 80. There have been cracking albums from, first, Fela's son Seun, and now Afrika 70 founder member Tony Allen.

When Kuti died, it seemed for a while as though Afrobeat might have died with him, so dominant had his presence been since the style's creation in the late 1960s/early 1970s. His son Femi was quick to pick up the reins, but, 12 years on, has yet to evince the concentrated fire and passion his father made such a defining feature of the music. Then, in late 2008, Seun released the blistering Many Things (Tot ou Tard), made with members of Egypt 80, and all bets were on again. And now Allen, Fela's longtime drummer and collaborator, pitches in with Secret Agent, another sterling set.

Kuti is generally credited as the "inventor" of Afrobeat, and his contributions—as a catalyst, bandleader and lyricist—were indeed crucial. But the credit needs to be shared with Allen, Kuti's drummer from 1964 - 1980, who created Afrobeat's signature, lazily insistent rhythms, and who played on all the classic Afrika 70 albums. Kuti once said that Allen played "like four drummers," and indeed, Allen's rhythms fuse four distinct drum traditions—highlife, soul/funk, jazz and traditional West African roots. Without Allen, Afrobeat might never have happened. So important had his role been, that when he left Afrika 70, Kuti broke the band up, forming Egypt 80 a few months later.

Allen, who's been based in Paris since the mid '80s, had a quiet '90s, but moved up a gear towards the end of the decade. Secret Agent is his fifth album as leader since 1999, and follows the magisterial Lagos No Shaking (Honest Jons, 2006). In the last couple of years, Allen has also been one-quarter of the boundary busting super group The Good, The Bad & The Queen, alongside vocalist Damon Albarn, bassist Paul Simonon and guitarist Simon Tong.

Raw and uncut, foursquare in the roots Afrobeat tradition, Secret Agent has all the ingredients that combine to make the style so special. Fat, full-throated, hard riffing horns, nagging tenor guitars, jazz- and funk-informed saxophone and trumpet solos, effervescent chicken-shack keyboards, lyrics rich in folk metaphors and proverbs—some of which confront state corruption and oppression, Kuti's most frequent targets, still alive and toxic in Nigeria today—call and response vocals, and, of course, energising everything around it, Allen's magnificent drumming.

A couple of laid-back, late-night tracks provide balladic respite. Elsewhere Allen drives the music on, straight as an arrow, but without recourse to simple time-keeping, working almost elliptically, in a loose-limbed ragged shuffle, nudging and bumping round the edges, drawing the cross-rhythms into one irresistible forward motion.

Allen's Paris-based band comprises players from Nigeria, Cameroon, Martinique and France. Vocals, however, stay the preserve of Nigerians, and are shared between Allen and singers/lyricists Orobiyi Adunni, King Odudu, Bola Dumoye, Kefee Obareki and Abiodun Oke. The lyrics are variously sung in Yoruba, English, Broken English and Orobo. Allen's "Secret Agent" is in English and his "Elewon Po" ("too many prisoners") in Broken English, English and Yoruba. The four lyrics written by Adunni—"Ijo" ("dance"), "Nina Lowo" ("money is to be spent"), "Ayenlo" ("time is going, the world is moving") and "Atuwaba" ("no matter if things are bad, it will get better")—also use this trio of languages. Obareki's "Busybody" is in English and Orobo. Odudu's "Celebrate" and "Pariwo" ("shout, protest, make some noise") are in English and Broken English. Oke's "Alutere" ("the message the drums transmit") is in Yoruba. "Switch" (Dumoye's alias) is sung in English and Broken English.

Somehow, Afrobeat sounds as relevant in 2009 as it did back in Fela Kuti's heyday. Its catholic blend of jazz and funk with traditional African rhythms, and its socially engaged lyrics (purposefully sung in Broken English by Kuti to communicate across indigenous linguistic barriers), was the sound of shanty towns across West Africa in the 1970s. Today it also speaks of and to growing, polyglot, inner city diasporas in Europe and North America. It could be that Afrobeat is about to begin another spell in the global spotlight.

If so, Tony Allen, with this compelling debut release on the World Circuit label—home of the globally successful Buena Vista Social Club—is ready for it.