BY MATTHEW WARNOCK
January 27, 2010
Sign in to view read count 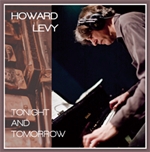 Tonight and Tomorrow is an intellectually stimulating and highly enjoyable album by virtuoso harmonicist Howard Levy. Featured on both harmonica and piano, even performing both simultaneously on "Sandi," Levy and his trio—bassist Larry Gray and drummer Ernie Adams—perform together as if they've been on the bandstand for years. With an uncanny ability to interpret and anticipate each other, the trio sounds as one instrument as it weaves its way through the album's various tempos, feels, grooves and harmonic progressions.

Levy wrote all of Tonight and Tomorrow's tunes, with the exception of two collective free improvs, "Flunky Jazz" and "Triosity." Drawing from across his forty-plus year career, Levy has brought together ten songs reflecting his different artistic tastes. There are odd-meter compositions such as "Song for Susan," Brazilian-influenced grooves like "Chorinho," and everything in-between. With such a diverse and extensive history it would be almost impossible for Levy to sum his career up on one disc, but Tonight and Tomorrow comes as close as possible to doing just that.

Levy's harmonica playing is startlingly fluid and full of the technical prowess that would be expected from the genre's top saxophonists, not from an instrument that is often associated with campfire cowboys and Mississippi bluesmen. In the capable hands of the Chicago-based musician, however, the harmonica cooks. On the opener, "Howard's F# Blues," and the freely-improvised "Flunky Jazzary," Levy tears across the Instrument's three octave range with such a wide variety of tonal colors, harmonic flavors and timbres that it is almost impossible to think that all of these amazing sounds are coming out of an instrument that fits into the palm of his hand.

Gray and Adams give stellar performances throughout. Aside from his strong rhythm playing, Gray also contributes several memorable solos, including standout improvisations on "Song for Susan" and "Slanted Samba." Adams is as solid as a rock with his comping and grooves. Never one to overplay, Adams knows exactly when to lay back and let the soloist explore the groove and when to jump in and engage the lead player head on. It is this level of interaction between the rhythm section and soloist that provide some of the albums most poignant moments.

Tonight and Tomorrow is an engaging release by the Chicago trio of Levy, Gray and Adams. These three musicians have come together to prove, once again, that it's not necessary to only look to New York for the best in American jazz. The Windy City scene is doing just fine, thank you.