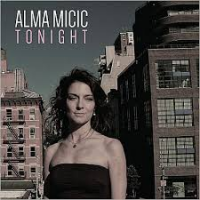 Vocalist Alma Micic hails from the creatively fertile Balkan area (Belgrade, Serbia) of Eastern Europe. As of late, she has been plying her trade in New York City and has struck up a very productive and creative relationship with guitarist Doug Wamble resulting in her third recording, Tonight, following The Hours (CTA Records, 2008) and Introducing Alma (CTA Records, 2004). A release every four to six years has become a norm for many artists and in the case of Micic, the fallow time since her last recording was fill with a creative thoughtfulness tempered with a daring, in-your-face disregard for stylistic boundaries. Tonight is comprised of nine selections, five original compositions and four "standards." But calling these non-original songs "standards" is a bit misleading. Better to be considered Micic's effort to expand the present classification of standards.

Micic covers Sting's "Roxanne," originally from the Police's 1978 album Outlandos d'Amour (A&M). Micic takes the off-time, off-beat quasi-Reggae pop confection, transforming it into a breezy, self-propelled ballad with no discernible stylistic allowances. Micic's singing is relaxed and intent, gently supported by Wamble's smart nylon-string playing. Bassist Sean Conly is given generous solo space where he gives an understate impression of the song's harmonic skeleton. The head-turner "standard" is Guns N' Roses "Sweet Child O' Mine," which is given a 1930s, prewar Hot Club treatment. Micic sings with a swinging sweetness and an even timbre. Wamble's support is measured. He and Micic engage in a wordless duet recounting the Slash's first guitar break to exciting effect.

Micic's "Kot' Pokida Sa Grla Djerdane" is a Serbian traditional piece rendered as high folk by Wamble's considerate rhythm and lead guitar playing. Micic sings with a sweet passion and a barely detectable darkness giving the performance a certain romantic presence. Immediately following is Micic's "Dawn" which offers an English- language counterpart to the Serbian folk piece, again with a darkness at once appropriate and cleanly delivered. Tonight is a freshly conceived and performed project that demonstrates the positive growth in Micic's evolution as an artist. She has an interesting and promising future what should be filled with exceptional moments like this one.

Dark Cloud; Love is Stronger Than Pride; Woke Up This Morning; Roxanne; Tonight; What Can I Do for You; Sweet Child of Mine; Kot’ Pokida SA Grla Djerdane; Dawn.