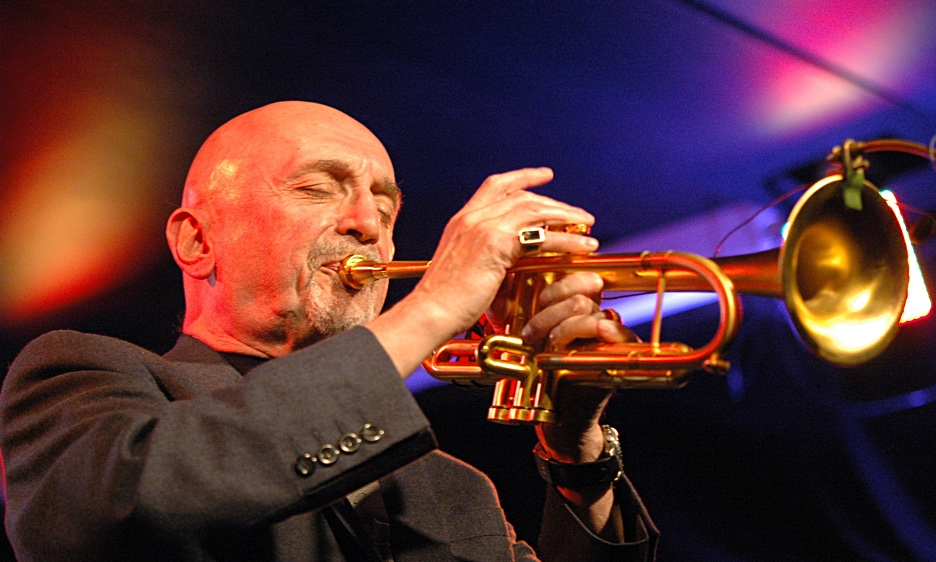 Before I go to the studio I try to be completely empty. It's very dangerous if you have a routine and strong expectations because the end result is almost always completely different. —Tomasz Stanko

Polish trumpeter Tomasz Stańko has finally been enjoying the kind of international acclaim that he has deserved his entire forty-year career. After a lengthy hiatus from the ECM label, he returned in '95 with Matka Joanna, the first of a string of recordings that were increasingly successful, both musically and in terms of broadening his exposure on the international stage. With the release of '02's The Soul of Things, Stańko and his quartet of young Polish proteges took things to another level, with their first tour of the United States and more regular performances around Europe. And now, with the release of Suspended Night, Stańko has reached a stage of confirmation and consolidation that assures further things to come.

Guitarist John Abercrombie, in a recent interview, discussed how as musicians age they seem to lean more towards the tradition, citing Italian trumpeter Enrico Rava as a prime example. Stańko has found the same pull happening to him. "As I get older," explains Stańko, "my musical direction is more communicative; there is more tradition in my music. In the last few years since Litania my music has been much closer to the tradition. I was thinking about this and it is probably a very natural process. When musicians are young they have a natural disposition towards novelty; they want to build their own language rather than build from tradition. Better to try something new, easier to build. But later, life, age and experiences dictate looking longer and more carefully at tradition."

Stańko's early days were characterized by a free direction that was ably supported by his Polish compatriots, as well as associations with more experimental players including the late drummer/composer, Edward Vesala. "In the beginning I was a free player," Stańko says, "I was fascinated with Ornette [Coleman], all the new things that were happening at the time with George Russell and Cecil Taylor. Taylor played in Warsaw in '65 and used to hire me a lot. So my music was born from free jazz."

But even in the early days of free music, Stańko's liberated music was characterized by a distinctive lyricism. His conception of free music was somehow different. "It's hard to put into concrete terms," says Stańko, "hard to define what freedom is. I think, for me, free music is more and more an idea ; not a style—although it is a style—but sometimes, for myself, it is better to know and respect a free conception in music, but not play too much. It's kind of dangerous to play only free music, especially if you like melodic stuff like I do. It's kind of dangerous because it's very easy to lose control in improvised music. Also, free music can easily be devaluated, at least in my experience. Of course if you have an artist like Cecil Taylor, freedom for him is different, more about energy and I respect him so much because of that.

"In the beginning I had a quintet with violinist Zbigniew Seifert," continues Stańko, "and we were playing totally free. But slowly, over time, this free music began to organize, and I thought, 'This is strange; why we organize more and more correctly.' Now, I'm in a place where I very much respect free music, but I don't play it too much."

Still, with records like Suspended Night, with an emphasis on melody and structure, there is an inherent freedom as well. "I'm born of freedom," Stańko explains, "and free music is like a child. I will always have freedom within my music. We play our recorded compositions much differently in concert, there's an evolution that comes from the freedom we have when we play.

"I like melodicism, I am pretty traditional," concludes Stańko, "I've been told that I'm a combination of lyricism and craziness, which I think is a good description because I'm very lyrical on one side and kind of wild on the other. These two elements are very strong in my music."

The move towards a stronger lyrical bent has been gradual, just as the move away from free music has occurred over a long period of time. But it is the freedom that remains in his music that keeps it fresh; Stańko's music has the distinction of managing to sound new with every listen. Layers reveal themselves, making each listen sound like the first time. This quality began most notably with '94's Matka Joanna and continues to this day.

The quartet that recorded Matka Joanna and '97's resplendent Leosia was originally meant to team Stańko with a group of all-Scandinavian musicians. Pianist Bobo Stenson and bassist Anders Jormin were onboard and, says Stańko, "the idea was to use Jon Christensen on drums, but he was busy; that was ultimately very good luck because I thought about whom I could arrange the session with and the idea of Tony Oxley came up. I had played with him many years ago at the end of the '60s, and I remembered that he was always a very free player; but he is one of those cats who knows the tradition, even though he doesn't like to use it. So I called him, we started to play and he was fantastic in the band because he was from a completely different background than Anders, and it gave the group a special kind of energy. Bobo was like the glue because he could play anything.

"That was a really interesting band for me," concludes Stańko, "but intriguingly we played more time in concert than we did on either of the records, which surprised me because Tony didn't like to play traditional music."

Following the dissolution of Stańko's first quartet, ECM label owner and producer Manfred Eicher came up with an idea that would produce one of Stańko's classic recordings. "Manfred asked me if I would think about recording some music from my early days in Poland with Krystof Komeda. Komeda was a famous film composer as well as a very original jazz composer; he wrote in closed form, not very typical for jazz music because it was more of a classical system. But he was very special; he inspired all of us to play in a more exact way.

"I remember in '65," continues Stańko, "we were playing at the Montmarte club in Copenhagen, and sometimes Don Cherry would join us because he was in the city and he really liked to play this music. Komeda gave us this predisposition for combining tradition and novelty; he was also into scalar music like Coltrane and Davis, but from this language he built his own language.

"So it was a fantastic idea," Stańko continues, "I was very lucky that Manfred proposed this. We discussed who would play on the session and made the band a little bigger than originally planned—from the original quintet we made it a sextet with two saxophones, trumpet, and rhythm section, with Terje Rypdal guesting on a few pieces. I took a sampling of Komeda's material; some from his soundtracks for Roman Polanski films like Knife in the Water and Rosemary's Baby, and two of his extended compositions for quintet; and that was Litania.

"Using Terje was also Manfred's idea," continues Stańko, "just to add some colour. We didn't know exactly what we were going to play, but we ultimately did three versions of 'Sleep Safe and Warm' and included all of them on the album because they were all so different and all so good; a real example of how different his compositions could be.

"And Jon Christensen; he's one of the great drummers," concludes Stańko. "Like Oxley he can be a beautiful free player, but he also has great time. He was especially good for the Komeda material because he's a melodic drummer—he can play the drums as a melodic instrument. We also chose Jon because he'd played with Bobo and Palle [Danielsson] in the past, so it was very organic; it was a great idea to have them all together on this session."

From the Green Hill

Stańko's next project, the genre-busting From the Green Hill, came out of an unexpected meeting between Stańko, saxophonist John Surman, violinist Michelle Makarski and bandoneon player Dino Saluzzi at an unusual ECM festival. "It was a very special all-acoustic environment," says Stańko, "a circular hall that was very much like a tower. We played the title track from Litania, with each of us in a different part of the hall. So we made this beautiful acoustic sound and the version of "Litania" was quite different, so we got the idea to make a record.

"The first idea," continues Stańko, "was to use Jon Christensen but only on percussion instruments; but when we got to the session we decided to have just drums, to get a more classical sound. I wrote music for it, we had a couple of days of rehearsal where we tried to get the sound together. John also wrote a very beautiful piece, 'Stone Ridge,' for Michelle. It was an interesting project because of the different colours we got by having musicians from different kinds of aesthetics. Michelle is a completely classical violin player; Dino is a little more of a jazz bandoneon player; John is simply special with colour. It was a very good band for colour, for sound; sound was always an important thing."

Concurrent with Stańko's work with international musicians, he had been playing with a trio of young Polish musicians at home. Pianist Marcin Wasilewski, bassist Slawomir Kurkiewicz and drummer Michal Miskiewicz, who also function as a trio with the name Simple Acoustic Trio, were only sixteen when Stańko first began playing with them. "It was difficult to engage people like Bobo, Anders and Tony for smaller gigs in Poland," explains Stańko, "so I had to have a band. And I was very lucky; from the very beginning these guys played very, very well. They played jazz so well when they were young, great traditional jazz—they didn't play free music at first—but slowly they have grown in their ability to play free as well.

"It impressed me that, gig after gig, they were always getting better," continues Stańko. "I remember once I came back from doing some gigs with Bobo, Anders and Tony, and the next day I had gigs with them and, while I got a different feeling, it was just as good. So I started to play with them more, including concerts outside of Poland, and we gradually worked to where we are now."