BY ROGER FARBEY
August 7, 2016
Sign in to view read count 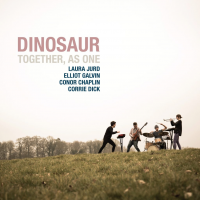 Dinosaur is a new British jazz "supergroup" of sorts, featuring up and coming virtuoso trumpeter Laura Jurd and keyboardist extraordinaire Elliot Galvin. It's no surprise that Jurd received the United Kingdom's Parliamentary Jazz Award for "Instrumentalist of the Year" in 2015. Galvin released his second, highly acclaimed album Punch in 2016, also on Edition Records, and is surely in poll position as the presumptive heir to the brilliant Django Bates in the British jazz keyboardist stakes. The quartet is completed with one of the best rhythm sections around.

"Awakening" is an moody modal foray redolent of Miles Davis circa his Filles De Kilimanjaro era, but by sharp contrast "Robin" is a perky number with playfully disparate, interwoven themes somehow managing to indelibly imprint themselves into the listener's memory almost immediately.

"Living, Breathing" is a little more circumspect than its predecessor but no less engaging, sandwiched between a keen head. Jurd's florid trumpet resounds over a wash of keyboards, backed by fluid bass guitar and snappy drumming.

"Primordial" has just the right level of distorted waves of Fender Rhodes in the manner of Jan Hammer (in an early Mahavishnu Orchestra manifestation) to elicit pure electric excitement, all overlaid by Jurd's incisive and fluent trumpet. The elegiac closer, "Interlude" signs off what must surely rank as one of the best debut albums for years, a remarkable fusion of thoughtful compositions, skilful musicianship and visceral energy.

Title: Together, As One | Year Released: 2016 | Record Label: Edition Records