By Charlie Ricci
November 9, 2013
Sign in to view read count 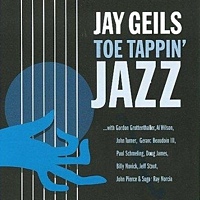 Toe Tappin' Jazz, released near the end of 2009, is the most outstanding new jazz CD I've heard in many years. The band leader is guitarist Jay Geils, formerly known as J. Geils, founder of Boston's famous party band of the 70s and 80s whose biggest hits were "Lookin' For a Love," "Give It To Me," "Must of Got Lost," "Centerfold," and "Love Stinks." Who knew the hard-rocking Geils had this much love for jazz in his heart?

The disc is the former rocker's second jazz release (the first one is Jay Geils Plays Jazz) and both have received high praise from the few people who have heard them. If not online Geils' little gem is hard to find. I only stumbled across it at a souvenir shop's CD kiosk while on vacation in Lennox, MA this past summer.

The music featured on Toe Tappin' Jazz is nothing fancy, nothing experimental. It's just superbly played traditional jazz with the emphasis on melody and song structure. Sure, there is plenty of improvisation (what is jazz without it) but it's all very tastefully presented. The soloists never run amok or lose sight of the rest of the band because the group performs as a true ensemble.

Geils plays all of the electric and acoustic guitars, plus some vibraphone on three tracks, but he does not hog the limelight. None of the rest of the band are household names but everyone turns in a warm and loose performance that is truly a labor of love. Among them are drummer Gordon Grottenthaller. Reed man Billy Novick plays alto, tenor, and clarinet. Doug James plays baritone sax and Jeff Stout is the trumpet player. John Turner provides acoustic bass. Also featured are trombone, piano, and organ. Sugar Ray Novick adds vocals to one of the twelve tracks.

Tunes include two Johnny Hodges compositions, "Good Queen Bess" and "Funky Blues." The band also covers Benny Goodman's "Don't Be That Way," Roy Eldridge's "Fish Market," "Stuffy" by Coleman Hawkins, and Count Basie's "Theme From M Squad." There is also a nice version of Jimmy McHugh's standard "On The Sunny Side Of The Street."

Geils has admitted his first loves have always been jazz and blues but, as he states here, he never believed he was good enough to play either, until recently. I'm glad he changed his mind.

Good Quenn Bess; If I Were a Bell; Funky Blues; Stuffy; Theme from M Squad; Li'l Darlin; Don't Be That Way; Fish Market; Sunny Side of the Street; Down for the Double; One Sweet Letter from You; Pyramid.

Charlie lives in suburban Philadelphia with his wife who favors folk music and singer-songwriters.