By ROGER FARBEY
October 2, 2017
Sign in to view read count 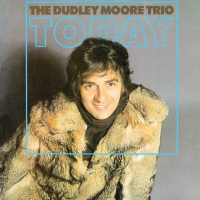 Dudley Moore was something of a genius but his contribution to jazz could have been greater had he not been diverted by his other activities. Following his rise to stardom as a member of the satirical Beyond The Fringe team and his subsequent BBC television appearances with Peter Cook in the hit comedy series Not Only...But Also, he started making movies which benefitted from increasing degrees of commercial success. Through films such as Bedazzled with Raquel Welch, 10 with Bo Derek and Julie Andrews and Arthur with Liza Minnelli, he became, to all intents and purposes, a genuine Hollywood superstar. So that didn't leave an awful lot of time left for jazz which is a shame because he was a prodigiously talented musician, starting out as pianist with John Dankworth's Orchestra and later forming his own trio.

Within the space of a decade, spanning the mid-1960s-70s, he recorded only a few albums with the trio, including The Other Side Of Dudley Moore, Genuine Dud for Decca and Today for Atlantic. This last album, recorded during a three week tour of Australia in 1971 was typical of his repertoire. It was populated by originals and standards and Moore's primary influences, Erroll Garner and Oscar Peterson were readily discernible. But he also possessed his own stylistic idiosyncrasies not least in his own compositions typically imbued with the ebullience that reflected his on-screen persona. "Song For Suzy," written for his first wife the actress Suzy Kendall, is a perfect example, part jazz, part pop, it even made it into the charts when released as a single. On this track Moore actually scat sings a very catchy melody over the bluesy chords.

Of the standards, Burt Bacharach's "The Look Of Love" and Henry Mancini's "Two For The Road" stand out. "Robyn's Blues" is an affecting 12 bar and "The Staircase" is reminiscent in its opening bars of some of the orchestrated pieces on the Moore-composed score of Bedazzled. Given the relative paucity of Moore's recorded musical output, Today must rank as an important reissue and there's a bonus of an accompanying ten page booklet with comprehensive biographical sleeve notes and some rare photos.

The More I See You; Waterloo; Before Love Went Out Of Style; Look Of Love; Song For Suzy; Two For The Road; Robyn’s Blues; The Staircase.