BY HRAYR ATTARIAN
September 10, 2019
Sign in to view read count 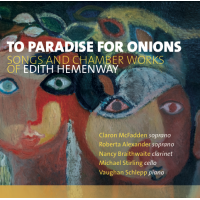 American composer Edith Hemenway wrote some of the most sublimely impressionistic music of the 20th century. Yet, outside of a small circle of aficionados and admirers, she remains virtually unknown. Unfortunately, despite her long career, To Paradise with Onions is the first time her work has been released on disc. Produced by longtime collaborator, clarinetist Nancy Brathwaite, this exquisite album consists of six of Hemenway's literature-inspired suites.

Based on Poet Laureate W. S Merwin's prose from 1979, "Asian Figures," for instance, is a series of brief clarinet and piano duets. Accompanying Brathwaite is pianist Vaughan Schlepp; their stimulating and tense exchanges give the piece a vibrant and captivating immediacy. From the whimsical "I Eat the Cucumber My Way"—with its dramatic atmosphere marked by Schlepp's percussive piano and Brathwaite's sinewy clarinet—to the melancholic and hypnotic "Autumn Rides Down On One Leaf," the two musicians paint abstract sonic images that provoke and move. Angular and crystalline phrases create the futuristic ambience of "Thread Has to Go Where the Needle Went" which delightfully contrasts with the cinematic lyricism of the wistful "Ferns Bend Into The Water/Over There."

Schlepp joins sopranos Roberta Alexander and Claron McFadden for a haunting rendition of "Four Poems of Langston Hughes," one of Hemenway's masterpieces. Alexander and McFadden's overlapping voices float over Schlepp's expressive pianism with elegance and grace. The performance is in keeping with the soulfulness of Hughes' verse. For example, Schlepp creates a blues-tinged harmonic tapestry on "Down and Out" while the vocalists' song shimmers with a hymn-like spirituality.

The seven-movement "Questions of Travel," after an Elizabeth Bishop poem, is an intriguing and multilayered composition that Brathwaite, Schlepp and cellist Michael Stirling interpret with almost mystical nuance and introspection. The sombre "Journey of Ancients" features the stately growl of the clarinet over resonant and reverberating piano notes and darkly-hued cello drones, while the serene "Siesta" is lullaby-like as it starts with softly undulating clarinet and cello lines. Schlepp contributes resonant notes that echo the preceding melody with tenderness and emotion.

This splendid and singular CD is a welcome introduction to Hemenway's unjustly underappreciated oeuvre. Being performed by artists who truly connect with and thoroughly absorb the composer's creative vision makes To Paradise with Onions that much more special. Hopefully, more of Hemenway's brilliant output will be recorded in the near future.