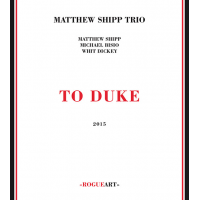 So has pianist Matthew Shipp finally clambered aboard the repertory album bandwagon? Certainly on To Duke he addresses seven standards derived from the Ellington Orchestra, alongside four originals. But if you cast an eye over Shipp's discography you'll find such pieces are nothing new. Actually popular songs constitute an enduring part of his repertoire. What's unusual here is the focus on several from the same songbook on the same set. But there's no question of special treatment. In terms of development they often sound little different from other trio inventions. Typically Shipp uses the written material to establish a mood and act as reference points amid the flurries of tangential interplay.

Shipp's accomplices possess the prowess to follow him wherever he goes, though they also have the freedom to choose not to follow him at all. Bassist Michael Bisio offers oblique commentary on the leader's distinctive stylings, whether through plaintive upper register pizzicato or buzzing bow work. On drums, Whit Dickey provides the bedrock of multi directional meter which both creates tension and allows and encourages the pianist's digressions. Shipp's renditions of familiar strains engender a lighter than usual feeling from his patented blend of insistent motifs, sparkling runs and hammered single keys, largely eschewing the customary crashing depth charges.

Shipp's approach recalls a refurbishment of a classic building where the facade remains largely intact but hides an ultra modern complex behind. While Shipp opens the program alone with stirring chords and a rolling cadence on "Prelude to Duke," "In a Sentimental Mood" ably illustrates the trio's modus operandi. Although Shipp revels in the theme, the rhythm team might be pursuing unrelated charts. Dickey lays down a lattice of polyrhythmic layers, while Bisio's counterpoint mediates between the two. But it all makes sense when Shipp leaves the tune for a minimalist chiming sequence nonetheless in the same register and tempo. Then when Bisio and Dickey do eventually lock into the same beat they conjure a glorious surging quality, which ends the track on a high.

"Satin Doll" begins with a playful call and response between piano and bass. In their hands, time expands and contracts, until Shipp spins off in a string of dizzily mutating figures. While threeway interaction prevails as the prime directive of the day, Bisio tackles "I Got It Bad and That Ain't Good" solo, moving from sighing slurs via world weary melancholy to a veritable blizzard of notes, which acts as a suitably engaging foretaste of the rapid clip of the ensuing "Take the A Train." At times the bassist sounds as if he is hanging on for dear life in a welter of dashing piano lines and pulsing drums, before a thunderous climatic derailment. Later on "Dickey Duke" the drummer stars in a series of unaccompanied breaks for his throbbing perpetual motion tattoo.

By the close, it is clear that though nominally an exploration of Ellington, the recital is in fact essential Shipp.

Prelude To Duke; In A Sentimental Mood; Satin Doll; I Got It Bad And That Ain’t Good; Take The A Train; Mood Indigo; Dickey Duke; Tone Poem For Duke; Prelude To A Kiss; Sparks; Solitude.