BY EDWARD BLANCO
November 14, 2005
Sign in to view read count 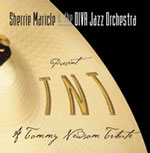 TNT is the fifth album by the explosive New York-based all-female DIVA Jazz Orchestra, blending a contemporary mainstream big band sound with a progressive flavor. Founded by a former relief drummer for the Buddy Rich Big Band, Stanley Kay, the fifteen piece big band has been under the direction of bandleader/drummer Dr. Sherrie Maricle for the last several years. Whether in the studio or in concert, the group has drawn critical acclaim for its play.

This record is a tribute to composer/arranger Tommy Newsom, who provided all of the arrangements and two original charts. "Titter Pipes," the opening swinging number, highlights a chase between Scheila Gonzalez on tenor sax and Karolina Strassmayer on alto. The other Newsom chart is "Three Shades of Blue," a slow and bluesy piece. Of the other pieces on the album, Claire Fischer's "Pensativa" is one of the most delicious. Strassmayer shows her range with a flute solo, followed by a moving run on the piano by Chihiro Yamanaka, backed up by bassist Noriko Ueda.

Anat Cohen takes center stage on clarinet with the Billie Holiday favorite "Moonlight," played in a New Orleans/Dixieland style. The "Nat Cole Medley" is a cleverly crafted musical collage of melodies and harmonies with a playful version of "Straighten Up and Fly Right" that finds the band on vocals. Barbara Larangona provides one memorable performance with her emotional flugelhorn solo on the slow and mellow "Too Late Now." I did not particularly care for the heavy trombone statements in the beginning of "Trail Mix," which is mostly a matter of taste.

Scheila Gonzalez delivers a passion-filled baritone sax solo on "Remember Medley." The finale, "Red Door," is another swinging number that simmers with a torrid pace and features Maricle's powerful drumming.

In appraising the album I would give an "F" for the color selection in the liner notes, whose lack of contrast makes for difficult reading. Musically, this is an exciting, entertaining, and thoroughly enjoyable CD that warrants a grade of "F" for many things: (F)ine arrangements by Newsom, superbly interpreted by the (F)abulous musicianship of a (F)irst-class all-(F)emale extraordinary big band that plays with (F)inesse, (F)reshness, and (F)ire.