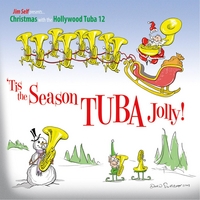 As would be anticipated, there's a lot of huffin' and puffin'—as well as a surprisingly wide range of color and modulation—on 'Tis the Season TUBA Jolly!, a delightful holiday album by tuba maestro Jim Self and the Hollywood Tuba 12. Its name notwithstanding, there aren't a dozen tubas present on any given track but a mere half- dozen, complemented by six of their close kinsmen, the euphonium, with percussionist Brian Kilgore  and drummer Bernie Dresel raising the group's total size to fourteen.

Self, a tireless promoter of his chosen instrument, has been presenting tuba-centered Christmas concerts for many years. He was inspired in this endeavor first by Stan Kenton's Christmas album from the 1960s, and later by the Hollywood Trombones Christmas Album. As it is only a short step (down) from trombone to tuba, epitomized in Self's eyes by Winston Morris' Modern Jazz Tuba Project, Self called on a number of the Los Angeles area's top arrangers to help put together a holiday album whose nucleus would be tuba and euphonium. The result of their collective labor and expertise is 'Tis the Season TUBA Jolly!

As for the music, it is comprised for the most part of typical holiday fare, opening with "Jingle Bells" and including such year-end staples as "White Christmas," "Let It Snow," "Winter Wonderland," "Frosty the Snowman," "Here Comes Santa Claus," "The Christmas Song," "Have Yourself a Merry Little Christmas" and Leroy Anderson's lively "Sleigh Ride," along with a number of traditional hymns: "Angels We Have Heard on High," "Jolly Old St. Nicholas" (Good King Wenceslas), "Noel, Noel" (The First Noel), "Joy TUBA World," "What Child Is This," "Silent Night" and last but not least, "Deck the Halls" (or, as presented here, "'Tis the Season TUBA Jolly!"). Rounding out the inclusive program are two Hanukah songs ("Mo'oz Tzur," "S'vivon"), Tchaikovsky's familiar "Valse des Fleurs" (Waltz of the Flowers) from The Nutcracker ballet and "Somewhere in My Memory," a Christmas song written by John Williams for the movie Home Alone.

The colorful charts are played as well as tubas and euphoniums can manage, which is quite well indeed, as the musicians at hand are among the best at what they do, making these unwieldy instruments sound as smooth and supple as one could envision. If you relish holiday songs in the lower register, 'Tis the Season TUBA Jolly! should leave you smiling from ear to ear.