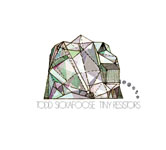 An active sideman, bassist Todd Sickafoose is best-known for his work with DIY singer/songwriter Ani DiFranco. But he's also been very busy on the outer edges of jazz, working with artists including John Zorn on Voices in the Wilderness (Tzadik, 2003), Tin Hat Trio on The Rodeo Eroded (Ropeadope, 2002), and Scott Amendola Band on the drummer's very fine Cry (Cryptogramophone, 2003). It may be Amendola's disc that hooked Sickafoose up with Cryptogramophone for Tiny Resistors, his third record as a leader but first to receive broader distribution. Irrespective, it's a far more adventurous and eclectic affair than the largely mainstream Blood Orange (Secret Hatch, 2006), well deserving of Crypto's backing and greater public attention.

While occupying its own space, it's the kind of record that simply could not have been made before Bill Frisell began to twist jazz on its side in the mid-1990s. With two guitarists—longstanding Norah Jones band mate Adam Levy and relative newcomer Mike Gamble—Sickafoose's penchant for relaxed grooves (often disposed to irregular meters) and skewed harmonics make it a strange combination of accessible and challenging, sporting unmistakable roots in Frisell records including the horn-driven Blues Dream (Nonesuch, 2000), sample-rich Unspeakable (Nonesuch, 2004), and ambient Americana sound sculpting of Floratone (Blue Note, 2007). In addition to the twin-guitar line-up and playing a more extensive collection of instruments himself (various keyboards, vibes and marimba), Sickafoose's core group includes three horns, drums and percussion, with guest appearances from equally on-the-edge saxophonist Skerik, DiFranco and violinist Andrew Bird, for a set of eleven originals with emphasis firmly on the word original.

Sickafoose creates broad soundscapes where unshakable, jam-like grooves are offset by arrangements that feel born of the moment, despite there being no way they could have been anything but carefully conceived. Folkloric acoustic guitar strumming and clean electric guitar lines get "Everyone is Going" off to a gentle start, but with trumpet, trombone and tenor sax weaving long, serpentine and off-kilter lines through the slowly solidifying rhythm, a foundation is set for Kneebody trumpetere Shane Endsley's warm-toned solo, leading to a hypnotic finale where shifting dynamics gradually dissolve for an electronics-filled coda that ethereally fades to black.

"Cloud of Dust" has clearer form, with its song-like changes and Bird's haunting melody. Sickafoose layers piano over his electric bass as Levy delivers a prismatic solo that transcends any Frisell references into a profound place all its own. The two guitarists drive the funky "Warm Stone" alongside drummer Simon Lott and percussionist Allison Miller, with Sickafoose's bass line not entering until close to a minute in. As sketch-like as some of Sickafoose's writing is, his ability to shape the music by combining a multiplicity of miniature motifs and aural derivatives makes for a thrilling listen that combines spontaneity with ever-present focus and intent.

Filled with powerful grooves, nuanced improvisational elan and its own blend of multifarious stylistic markers that combine for a twisted set of distinctive compositions, Tiny Resistors is a sure bet for sleeper hit of 2008.