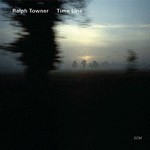 Few artists have made the art of solo performance a significant part of their body of work. If a pianist is around long enough, you can expect the occasional solo recording. But except for Keith Jarrett, few pianists have made solo performance a fundamental part of their discography. The same applies to the guitar, where Ralph Towner is another obvious exception. While Towner's 35-year affiliation with Oregon gives him an outstanding ensemble with which to explore group interaction, the majority of his discography as a leader has been about the intimacy of the duo and the insulated world of the solo. So it's no surprise that his first disc since Anthem (ECM, 2001) is another solo effort, with an emphasis on classical guitar.

In contrast to Jarrett's way of pulling something out of thin air, Towner's approach is more purposefully compositional. In an interview a few years ago, Towner spoke of viewing the guitar as a mini-orchestra. Bringing a piece to Oregon becomes a matter of deconstructing the score and reassigning specific parts. "If," a lyrical 5/4 piece that was also the opening track on Oregon's Prime (Cam Jazz, 2005), is a perfect example. Listening to the two versions, one can hear how Towner's fluid solo performance could be easily broken out for woodwind, bass and percussion. But Towner's ability to improvise while retaining the forward motion of a song's form has never been stronger.

Towner's more considered approach may contrast with Jarrett's stream-of-consciousness style, but he's equally capable of impromptu improvisation that sounds fully intentioned. Not only do the miniatures of the spontaneously created "Five Glimpses"—ranging from 25 seconds to just over a minute—function as distinct entities, but producer Manfred Eicher's sequencing creates a four-minute mini-suite which sounds as if it was planned that way all along.

Towner's also a masterful self-editor, never letting a song overstay its welcome—and he's an expert at working in and out of time. The dark theme of "The Pendant" is in waltz time, but when Towner begins to improvise, the time dissolves—yet, uncannily, the form is never lost. On the brief but abstruse "Oleander Etude," which centers on a rapid-fire series of arpeggios, Towner's interpretive sense of time creates a subtle tension and release. The equally esoteric "Freeze Frame," one of only two tracks featuring Towner on twelve-string guitar, is episodic but retains an inner logic.

Time Line could be viewed as just another Towner solo album, and it's true there are no major leaps here. But at this point Towner has transcended definitive statements, and each new album he make is instead part of a honing process that still manages to introduce new and unpredictable elements to his distinct and evolving sound.

The Pendant; Oleander Etude; Always By Your Side; The Hollows; Anniversary Song; If; Five Glimpses (I, II, III, IV, V); The Lizards Of Eraclea; Turning Of The Leaves; Come Rain Or Come Shine; Freeze Frame; My Man