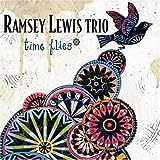 The latest album from the Ramsey Lewis Trio, Time Flies, revisits several Lewis benchmark recordings in addition to presenting new compositions. While I cannot say that Ramsey Lewis has come full circle since his late-1950s albums, it is indeed a pleasure to hear him in primarily a mainstream jazz setting again.

While much of the population marks "The In Crowd" in 1965 as ground zero for Lewis' popularity, I strongly recommend his recordings during the late '50s and early '60s, when he and fellow Chicago pianist Ahmad Jamal were battling head to head for the title of "best Chicago jazz trio" while on the same label (Cadet-Argo). Ramsey's success with pop rock tunes brought a lot of fans into jazz via his additional hit recordings of "Hang On Sloopy," "Something You Got," and other tunes. He showed a great knack of picking Top 40 tunes and transposing them into a jazz trio setting. Leaping ahead a few decades after his preference for electric piano and pop jazz in the 1970s and '80s, Lewis began recording for Narada in the late 1990s with a classical entry, Appassionata, and has since recorded two albums with singer Nancy Wilson.

Most of the themes that Ramsey Lewis has preferred over his career are somewhat evident on this album: classical, gospel, pop material and mainstream jazz. The trio is augmented with additional musicians on certain tracks and a gospel choir is added on two selections under the direction of his son, Frayne Lewis. Two compositions begin with the works of Brahms and J.S. Bach. "The In Crowd" is re-recorded with the same infectuous hand clapping as 1965 but with more insistent rhythm; and "Wade in the Water," another hit that was lifted from a spiritual melody, is remade replete with vocals, Hammond B3 and more of a smooth jazz feel. "Midnight at the Oasis," a pop tune from 35 years ago, is given the famed Lewis touch in making it into a three minute saga.

I most enjoyed the newer compositions. "Second Thoughts" begins as a stately classical composition and then adds light Latin percussion, along with the introduction of Lewis' piano. "Hide & Seek" and "Last Dance" are probing trio performances. Bassist Larry Gray gets some fine solos, including several arco displays, such as his work on "Estrellita."

Poco Allegretto from Symphony #3 in F Major by Johannes Brahms, Second Thoughts, Wade in the Water, Open My Heart, Air from Suite #3 by J.S.Bach, Hide & Seek, Midnight at the Oasis, Last Dance, Estrellita, The In Crowd, Hosanna.