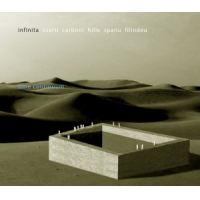 The opening 30 seconds of "Wild," the appropriately named first track on this exploration of the Time Continuum, belies the melody and the meter of the music that follows. The album consists of 10 more pieces, mainly from the pen of pianist Sid Hille and more than ably assisted by this thoroughly seamless Italo-Finnish foursome.

Hille's credentials have been accumulated during a 30-year career that has taken him all around the shores of northern Europe and beyond. Graduating from Utrecht in Holland, Hille soon took up an appointment in the small Finnish coastal town of Kokkola where, in addition to his teaching duties, he recorded some early albums and started to establish contacts throughout the Nordic countries. That this CD was mixed by ECM veteran engineer Jan Erik Kongshaug in Oslo can be explained by Hille's Scandinavian networking. More intriguing is his link with the Italian trio fronted by saxophonist Massimo Carboni, probably known best for his work with trumpeter Tim Hagans on 41st Parallel(Nagel Heyer, 2005). Carboni has a long career in Italy, and has been playing alongside the same rhythm section as on this CD in the Woodstore Quintet—bassist Paolo Spanu and drummer Gianni Filindeu. Tero Saarti completes the quintet, a trumpeter and flugelhornist known for his extended work with many local funk bands, as well as his participation in Finland's rampaging leading big band, the UMO Jazz Orchestra.

The album's intent, according to Hille, is to "challenge the boundaries of space and time by integrating the concepts of various European traditions and musical eras." This involves the writer reaching back into his own canon for "Cancion de Consuelo," recorded originally with his Platyplus Ensemble, as well as The Beatles' "Strawberry Fields Forever." The other eight tracks, disregarding the throwaway opener "Wild" (to live and tell the tale), form a body of shifting, persuasive pieces on which all players shine in easy tandem with their colleagues and Hille's measured piano. The music runs the gamut from the opener's cacophony to the penultimate "Petals," a bouncy piece inspired by Ezra Pound's two-line poem, "In a Station of the Metro": "The apparition of these faces in the crowd; Petals on a wet, black bough."

The music is often aching, always lyrical and consistently executed with warmth and finesse. If this collaboration required travel across 15 national boundaries of Europe, thinking of the most direct land-routes, then hats off to the EU. It probably has a lot more to do with Hille's own artistry—especially his humorous and inspired writing—and dedication to reaching across borders, let alone continua. As Ringo Starr would have concurred, "You know it don't come easy."