Jackie Greene: Till The Light Comes 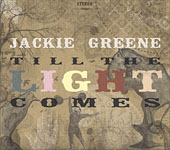 Jackie Greene's Till The Light Comes is an exercise in style the likes of which there is no precedent in his discography. The precocious California rocker's certainly made the most of his opportunities, since Grateful Dead bassist Phil Lesh "discovered" him in 2007, but this collaboration with Tim Bluhm (with whom Greene often performs as a duo called The Skinny Singers) is a wholly self-produced affair that bears only slight resemblance to the last two outings overseen by Los Lobos' Steve Berlin. It is, by contrast, a very polished pop production missing a sense of the folk and blues roots that provided a firm foundation for those prior sessions and, in fact, most all of Jackie Greene's previous recordings—and no discernible evidence of his embrace of the Grateful Dead canon either.

The album is comprised of five songs that Greene and Bluhm co-wrote, and a handful of tunes the guitarist/vocalist composed on his own. Most of the former are, like "Shaky Ground," replete with philosophical musings; allusive but no more penetrating than the musicianship which holds static at mid-tempo as the arrangements proceed. On a track like "Stranger in the Sand," Greene and Bluhm have couched their lyrics in a mix too cushy to work as contrast, or function effectively on its own terms.

It's difficult to know who to hold responsible for the misconceived ideas here, or even whether they're misconceptions at all but simply good ideas poorly executed. It may be a fact that Bluhm—who receives first billing on production credits—and Greene are simply unable to be sufficiently objective about their work with each other. "Medicine" and "Grindstone" elevate the pace discernibly, but there's still an overweening sense of the musicians playing too carefully for their own good, and that of the material. Strains of Farfisa organ on "Spooky Tina" and sitar on "1961" sound calculated, though the narrative of the latter number is the most arresting set of lyrics on the entire album.

Upon hearing the well-tailored arrangements of carefully-crafted music and lyrics rendered with an enervating ease, the title, Till The Light Comes, sounds almost like a disclaimer—though the title song itself has more personality than anything on the album. It's as if Greene believed he had to get all this experiment (sic) out of his system so that he could, sometime in the future, create something more distinctive and proportionately substantial.

Shaky Ground; Stranger In Sand; Medicine; Grindstone; A Moment of Temporary Color; Spooky Tina; 1961; Take Me Back In Time; The Holy Land; Till The Light Comes.