Andrew Schiller Quintet: Tied Together, Not to the Ground 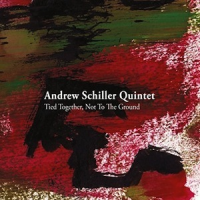 Andrew Schiller may be fairly young and only starting his recording career, but he's already learned some very good lessons. His debut as a leader demonstrates a level of compositional smarts that's impressive at any age, quietly building a series of coolly thoughtful quintet pieces, boasting an excellent ensemble and arranging each part in service of a well-constructed whole.

From listening alone, you wouldn't guess that his earliest musical experiences came with playing electric bass in a punk band and later studying the saxophone. Nonetheless those echoes are still faintly noticeable: the dual-horn frontline provides a healthy dose of brass while his lively double-bass work propels the group with a tasteful touch. Hery Paz and Alec Harper make a nimble team as they weave tight unison leads or trade off richly toned solos (or do both at once, as in the rhythmically spry romp of "Gluckschmerz").

With the whole band willing to take their featured spots without grandstanding, it's the writing that arguably makes Tied Together's central element. Schiller's pieces are drawn with a thoughtful deliberation, which lends them a distinct shape even if it takes some time to stick in one's head. "Head Down, Walk" weaves the saxophones and Frank Carlberg's piano in sharply precise patterns while making sure the steady ambling pace never quite gets lost. In the same way, the overall affair is always pleasant on the ears even as the rhythms avoid obvious patterns and the melodies are more subtle than catchy.

Much of the disc stays at a ruminative slow-to-mid-tempo with the odd "Gluckschmerz" or "Tink Tink" to bring the pace to a jog. Most spots are sketched just loosely enough to let the group's personalities fill in the corners, while the occasional breezy lope of "One That Never Was" or the free-drifting "CFBDSIR-2149" give everyone even more clear space to paint with tones as they wander. Schiller and company create the vibe of a classic Blue Note bop date brought into the current century; a session smooth, inventive and ready to continue revealing itself the longer one is willing to listen.

Little Shoes; Go Get 'Em Tiger!; Tink Tink; One That Never Was; Gluckschmerz; CFBDSIR-2149; Head Down, Walk; Skegness Is So Bracing; Tied Together, Not to the Ground; Wander.