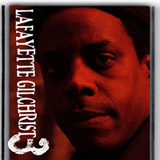 Three is Baltimore-based pianist Lafayette Gilchrist's first trio recording. Typically playing in larger configurations, Gilchrist is the leader of a seven-piece funk band, the New Volcanoes, and primary pianist for tenor saxophonist David Murray's numerous ensembles for the past few years. This stripped-down session is his most revealing record.

The Music According to Lafayette Gilchrist (Hyena, 2004), and Towards The Shining Path (Hyena, 2005), both featured the propulsive horn section of the New Volcanoes. Accompanied by his regular trio mates, bassist Anthony Jenkins and drummer Nate Reynolds, Gilchrist leaves the horn section behind and steps boldly into the spotlight as the sole voice.

Gilchrist's writing weaves together old-school funk rhythms with hip-hop cadences and raw street beats. Harmonically, his melodic sensibility embraces the esoteric angularity of Andrew Hill and Sun Ra as much as the emotional directness of the blues.

Jenkins plies glimmering ribbons of deep percolating funk and waves of sub-harmonic rumbling, executed with the finesse of an acoustic player. Simultaneously accompanying and dialoguing with Gilchrist, he adds a subtle harmonic twist to the trio's sound.

Reynolds, former sideman for Wilson Pickett, is an old-school Baltimore funk drummer. A tasteful percussionist, he plays with driving rock intensity and funky precision, maintaining a steady pulse without overcompensating.

A judicious mix of funk rhythms, hip-hop beats, soulful melodies and edgy improvisation, Gilchrist's trio travels a path similar to The Bad Plus, MMW, Jacob Fred Jazz Odyssey, Club d'Elf and graduates of the M-Base school. Three is another view into the future of the jazz piano trio.