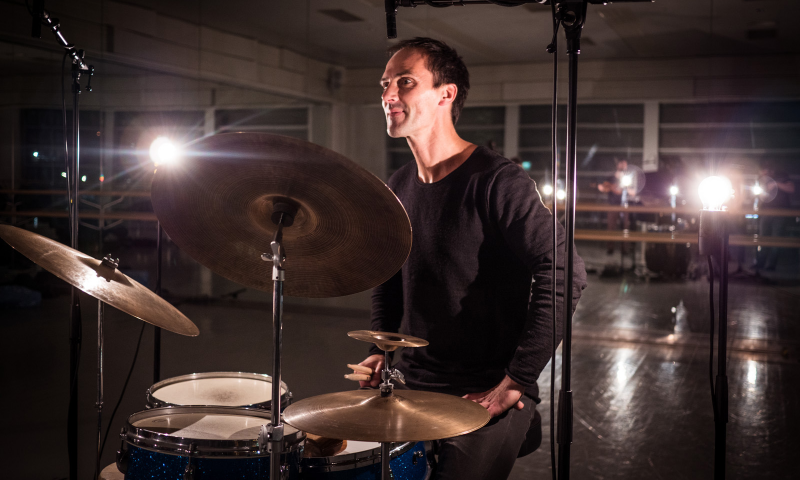 BY ENRICO BETTINELLO
February 6, 2018
Sign in to view read count
Time Is a Blind Guide, the ensemble led by Norwegian drummer and composer Thomas Strønen, has just released its sophomore record Lucus (ECM), three years after its eponymous debut album. With Ayumi Tanaka on piano, Hakon Aase on violin, Lucy Railton on cello and Ole Morten Vågan on double bass, Strønen has built a chamber-like ensemble that enables him to explore the details of his soundscape while keeping the music as open as possible.

The mood is quiet and spacious throughout the album, but even in the most lyrical moments, Strønen leaves enough space for a certain uneasiness, made possible by the improvisational skills of his band mates.

Those who are familiar with Strønen's music, know very well that his music strives to avoid the "Nordic Sound" clichés. Granted, projects like Food, at least in some of their albums, have a typical Scandinavian melodic mood, but both his solo performances and bands like the Humcrush duo showcase a penchant for adventurous sounds that goes above and beyond the comfort zone.

All About Jazz: I would like to start from your latest album, Lucus. How did you approach it?

Thomas Strønen: Like on our debut record Time Is a Blind Guide, I knew which musicians to compose for. When I compose I often think about the musicians that will play my music, as I want the music to feel natural for them. At times I can be challenging, I know, but int the end I want them to feel connected with the material. Also, I had been in the Swiss auditorium where we would record, so I knew the acoustic conditions we would be in. I wanted to record music that would fit with the room instead of having to fight a rather large ambience.

Most importantly, we have been playing together a lot since 2013, so we all know each other pretty well. Even though Ayumi was relatively new, she had already played with the ensemble several times. Compared to the first album, the ensemble often breaks into duo-trio-quartet chamber settings and the music includes more opportunities for improvisation. We are now a collective unit with an identifiable voice and so I did not need to write as thoroughly as I had to do for our first recording. when we were all coming to this project from different backgrounds and without as much shared history as we have today.

AAJ: How did this affect your writing?

TS: I decided to bring more open compositions to the table, leaving the musicians free to interpret the music however they feel. This requires them to have more initiative, but it allows the composition to be interpreted in different ways. I feel it gives the compositions a longer life as they musicians can play it very differently from day to day. A couple of pieces were written well in advance of the recording, but most of the material was composed within a short timeframe because before going to studio I had a couple of other commissions to finalize, which put me under heavy pressure to not waste time. And when you have to deliver, the ideas often materialize...

AAJ: The line-up of the Time Is A Blind Guide collective has changed during the years. Can you trace a brief history of this group and its characteristics?

TS: The music has continuously changed and also the personnel, from the very beginning. On the first concert I had three percussionists, as I wanted a percussion group within the ensemble, as well as a piano trio and a string trio. I toured with only one or two percussionists, but ended up using the other players to play percussion instead. Somehow, I like it better when non-drummers play drums. They all have a good sense of time and rhythm, but lacking the technique they play more openly, with no references to the common drum-language. I like that a lot.

In the first few years I also focused a lot on polyphonic grooves and odd time signatures and the music was leaning more towards jazz. At the moment, I like it being very open, airy and textural. Right now, I see it more as a chamber ensemble played by musicians with improvisational skills.

AAJ: What did pianist Ayumi Tanaka bring to the music of the collective?

TS: She has a background as a classical organ player but also brings a contemporary music angle as well as an ability to both take initiative and leave a lot of space. She can both challenge and please the music and she is a great communicator, colourist and improviser.

AAJ: An important role in this project is played by the string section. What's your relationship with string instruments?

TS: I started writing for strings after having released my solo record Pohlitz in 2006. I was a bit tired of my own sounds and also by the fact that everyone was aiming to play solo. Without thinking too much, I started writing a lot of music for string quartet which lead to many interesting projects both as a composer and drummer.

I like the sound of strings and I feel that it gives the space my music often requires. I also love being surrounded by strings and being able to colour the outcome with my playing. Being a drummer can be challenging in strings setting, and I like to play quietly yet still rich and energetic. Everyone can play loud, but the challenge is to hold the volume down and still play dynamically within the limits the music imposes.

AAJ: What projects do you have for Food the band you co-lead with Iain Ballamy?

TS: In the fall, we did a multitrack recording, as well as a video, at The Emanuel Vigeland Mausoleum, in Oslo. We have just made an edit and a raw mix of the music and we will turn that into a concert film. Where and how, is yet to be decided, but the images are amazing and the music isn't too bad either.

AAJ: The duet Humcrush with Ståle Storløkken has recently published one of its best records, Enter Humcrush. Tell us more about duet and, more generally, about the use of electronics in your music: how do you work on this, what is your equipment and what's the relationship between your acoustic playing and electronics?

TS: Humcrush is one of my longest lasting projects. It dates back to the time I studied jazz in Trondheim. Ståle and I have a mutual understanding about form and time, and so I find it very easy to play with him. We have always improvised freely and somehow what we play ends up sounding like a real tune, like on our latest record Enter Humcrush.

I always try to incorporate electronics in my playing. Music comes first. It's easy to bury oneself in an ivory tower of equipment and possibilities, but I've always tried to focus on my needs to create the music I want. Everything is possible, but everything isn't necessary. I normally use two hardware samplers and a mixer and one or two small synths. I have a few sampled sounds on my samplers, but most of it gets created on the spot. All programming of beats and sounds are always done live. I enjoy playing with the samplers as it gives you an ability to stretch the beats and make odd grooves and textures that you can't do acoustically. If something can easily be played live, I play it. I don't put all my trust in the machines, they are a just another tool to expand my musical output.

AAJ: Let's talk about the so-called "Nordic sound." Sometimes I'm a little embarrassed in touching upon this topic with Norwegian musicians, but knowing you personally and artistically, I think that you could be really a clever point of view. After decades of quiet, spacious, landscape-like, frozen, echoed, detailed "Nordic jazz" what are the "limits" of this concept?

TS: This term has been well used for as long as I can remember, but I don't think you find many Norwegians using it. Just like other general terms like "American Jazz" it does describe something that gives us an immediate but generic picture of what we are talking about. I'm tempted to say that our project is beyond the limits of Nordic jazz, but at least over here there are boundaries for what is musically substantial. Space with quiet and lyrical playing doesn't make good music. That often gets cheesy. The more open, quiet and spacious the music is, the greater is the need for dramaturgy, dynamics and resistance. The music needs to move within space. There is a significant difference between space and a break.

Much of Norwegian jazz music came to life because we were strongly influenced by the jazz played in the US, but we also grew up listening to rock music, classical music and early electronic music. There weren't many rules of what was right and wrong and the jazz history in Norway started at the time when US jazz was becoming freer and, at the same time, incorporating elements of rock music.

Being in the outskirts of Europe, Norway wasn't always the most natural country to visit for touring stars, so being a bit left out makes you sometimes do things your own way. In Denmark the situation is very different, being more centred and also much more visited by touring musicians. Denmark has been quite Americanized compared to Norway. Even in Norway, musicians' who's been into playing the more traditional jazz way, have looked over to Denmark top find companions.

AAJ: If you should suggest three records of yours to really understand your music, what would you choose?

TS: The latest Time Is a Blind Guide's record, Lucus, Enter Humcrush and Food's This Is Not a Miracle.

TS: A wide range of music... A Seat at the Table by Solange, Nattsyntese by Espen Reinertsen, The Study of Touch by Django Bates, Malibu by Anderson Paak, Kendrick Lamar's Damn, Project vol. 4-Hamburg Concert by György Ligeti, Process by Sampha, Garland by Eivind Buene and Miles Davis Live at the Fillmore.

TS: I cannot reveal everything, but I'm making a record this spring time with a fairly new trio together with Ayumi on piano and Marthe Lea on saxophone, clarinet, percussion, voice. I'm also writing for a larger version of Time Is a Blind Guide. There is also a new trio on the block, with Keiji Haino and Koichi Makigami. But, first priority this year will be Time Is a Blind Guide. We'll be touring in Italy in mid-April, in the United Kingdom in late May, in the US in late June, Brazil in August as well as India in December.