Freddy Cole: This Love of Mine

By ANDREW ROWAN
November 7, 2005
Sign in to view read count 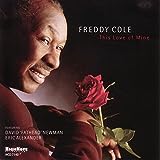 Freddy Cole has crafted a marvelous performance with This Love of Mine. He mingles old warhorses, giving them new clothes and offers newer songs, making them sound ageless. Here and there the voice sounds frayed but it only adds to his authority. The afterglow that the session radiates makes it a keeper.

The delights start with a swinging "What Now My Love? What is remarkable is Cole's ability to swing with authority and with ease. The trademark Cole family crooning comes to the fore on Benny Carter's "I Was Wrong, lovingly played by Joe Williams and Carter in 1995. Cole essays a plaintive strain that eluded even those giants of song. Even more unexpected is Lionel Ritchie's soul ballad "Still. Shadowed by Eric Alexander's spot-on tenor saxophone and cushioned by David Hazeltine's perfect arrangement, he soars on the bridge, a marvel of elegant expression.

The highest point of the session however comes from one of the warhorses, Frank Sinatra's self-pitying opus "This Love of Mine. John DiMartino's arrangement puts a new rhythmic spin on the song which leads to Cole's fresh perspective on the lyric. He eschews the near maudlin for the upbeat. He will make it, "though life is empty now that you are gone. And the kicker is the switch to burning swing in the bridge with David "Fathead Newman leading.

Perusing the repertoire brings its own joys: seldom-heard gems like Bob Dorough's bittersweet ballad "But for Now nestle next to old standards like "Out in the Cold Again and "That Old Feeling. He even takes a turn on a Fred Astaire favorite, "The Continental.

The session's valediction, plain and soulful, is the blues, still a building block of jazz. "On the South Side of Chicago offers this face of jazz too seldom heard today. Never really raising his voice, he conveys the essence of the song and the genre. This session invites the listener to sit back, listen, and enjoy.

What Now My Love?; I Was Wrong; Still; This Love of Mine; The Continental; But for Now; That Old Feeling; Out in the Cold Again; You and I; On the South Side of Chicago.