Home » Jazz Articles » Organissimo: This Is The Place

Organissimo: This Is The Place

By Stephen Latessa
September 27, 2005
Sign in to view read count 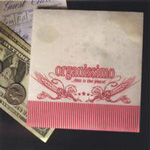 It shouldn't come as a surprise that Organissimo has struck a chord with the music buying public. Pouring the hot butter richness of a Hammond B3 over a funky backbeat with a side of tart and tasty guitar, the group's sound is damn near irresistible. With This Is The Place, the trio has overcome the dreaded sophomore slump by maintaining and consolidating the success of Waiting For The Boogaloo Sisters...

The slow gospel stroll of "Brother Ray is an obvious and immediate high point. Drummer Randy Marsh contributes some raspy, soulful harmonica in addition to his relaxed, evocative drumming. However, organist Jim Alfredson steals the show with some amazing, swirling work. He singlehandedly kicks the track into a higher gear. The same can be said for the additional percussion by Bill Vits that deepens and fortifies the groove on "Greaze Monkey.

A truly epic take on Frank Zappa's "Peaches En Regalia is the unquestionable peak of the album. Over the course of four and a half minutes, the trio manages to sound like four or five different bands. Opening with the main theme done essentially as a hymn, they soon swing into a funky strut. Guitarist Joe Gloss plays a stirring solo over the soaring organ before the tempo takes off and the band enters full flight. After their trip around the world, the trio basically finds itself back in the place it started, but probably still trying to process the places they've been.

The audacity of the Zappa cover, which is still decidedly reverent, throws into relief some of the more conservative tracks on the album. "Wealthy Street for example, is certainly well played, but it slightly overstays its welcome at around nine minutes. The playing is always more than competent, but it seems less inspired than on some of the more adventurous numbers.

This Is The Place shows that there is still a lot of intriguing music to be gleaned from the organ trio format. The groove is the foundation of the sound, but organissimo also prove that they can successfully stretch out with more ambitious efforts.