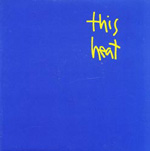 I have no recollection of whether or not this recently reissued and remastered album attracted a cult following at the time, but hearing it again after almost thirty years is a forceful reminder of just how original This Heat was, insofar as the term "original" is apposite for a band that encompassed—as it does here—the most rarefied art songs and a percussion workout that alludes to the work of the Art Ensemble Of Chicago.

It should be remembered, of course, that the '70s were a decade in which the term "experimental" could be applied to music popular or otherwise in a greater than pejorative sense, and by that token This Heat was decidedly a trio with a penchant for the experimental. This did not, however, automatically lead to the kind of arrhythmic atonality that might be associated with the term; indeed, the snappily titled "24 Track Loop" is mostly made up of the kind of genetically modified funk that the likes of Can so excelled at.

Similarly, the notion of the art song need not necessarily conjure up ideas of overblown pretentiousness, at least not in this case. Both "Not Waving"—with a lyric based on a Stevie Smith poem, if memory serves—and "The Fall Of Saigon" are songs singular enough to offer a whole new take on the definition. Charles Bullen, Charles Hayward and Gareth Williams each play a number of instruments and sing as well.

For anyone who believes with even the slightest degree of sincerity that some musicians should be out there probing the very meaning of music, this reissue should be compulsory listening. And while it's not of itself proof positive of anything other than the fact that This Heat put together some extraordinarily singular music, it's evidence also of the fact that the commercial prerogative was hardly an end or indeed an objective in itself. How times and circumstances change.