The Heavyweights Brass Band: This City 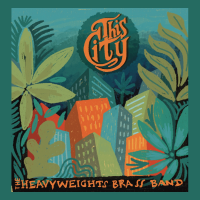 Brass band music and culture will forever be linked to NOLA. It's written in that storied locale's history and it rests in its musical groundwater and roots. But This City reminds us that those roots now anchor branches that hang above the past and extend north across the continent.

While hardly bound by tradition, The Heavyweights Brass Band most certainly owes a debt to Crescent City combos of a similar instrumental ilk. And with its third album, this Canadian crew acknowledges and pays that debt. The group made a southward pilgrimage to New Orleans to record this music, soaking up the climate, harnessing the magic in the air, and inviting several notable guests from that local scene to come aboard for a hot, quick, and wonderfully raunchy album that hits all the right pleasure zones. The results speak to full-circle feelings, dance floor designs, and the entire brass band continuum. Take the album opener—trombonist Chris Butcher's "Hands Down Lo'"—as the first piece of evidence. Tom Richards' tuba and Lowell Whitty's drums set this funky number in motion, vocals juice up the scene, and trumpet and trombone roar across the aisle at one another. Then the band jumps right back into another groove zone with tenor saxophonist Paul Metcalfe's arrangement of the Stevie Wonder-penned "Tell Me Something Good." It's a riff-friendly party that's at once loose and precise in its flow.

Those and several other numbers—the earthy and caffeinated "I've Got Time For You," the boisterously bluesy "Dance Out On The Corner," the feisty "Rosco's Big Hit"—typify what many recognize as brass band music in the modern epoch. But they aren't wholly representative of this outfit's outlook. Richards' soulful, R&B-tinged "Two Foot Ticket" and trumpeter John Pittman's arrangement of singer-songwriter Steve Earle's "This City" (featuring vocalist Jackie Richardson) indicate a broadened sensibility and sights set on other stylistic realms. They're the outliers in the program, but they're clearly not beyond the realm of normal for this group.

This City clocks in at under twenty-nine minutes, making it brief by most measures, yet it feels utterly complete. It's powerful, hip, and positively charged from beginning to end. The Heavyweights Brass Band packs a pleasurably mean punch on this stroll through the streets of New Orleans.