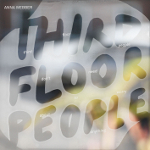 Those who stand up and give the finger to the status quo must be honored. New York saxophonist/flautist Anna Webber does exactly that, with a recording that brags not one, but two bass-less quartets. Third Floor People is a collection of 11 original compositions by Webber, employing two quartets—one from Montreal and one from New York City. The structure of the quartets are both drums and guitar, with either alto saxophone (Montreal People) or trumpet (New York People).

Of interest here is the New York People, with the title track turning expectations on their ear. While the introduction is well-behaved, consonant, and down-right provincial, an anxious undercurrent brews, with drummer Fred Kennedy and guitarist Owen Stewart-Robertson threatening to capsize the whole proceeding. The ghost of Shawn Lane emerges from the background of this piece, breaking through like a full-force auditory hallucination. Webber takes no prisoners, bayoneting the wounded as she leaves the field of battle...ditto the rest of the disc.