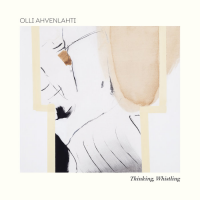 When Mose Allison wrote in 1958 that 'a young man ain't got nothing in the world these days' he was probably not intending to make a philosophical statement—more a question of power politics. But now(adays) the line now suggests something else to me. I think neither Roger Daltrey nor I thought about it this way, at least until I stumbled on Olli Ahvenlahti's latest release.

He stated in a recent interview that for him jazz consists of melody, harmony and rhythm, and that is the order of priority on this album. He is a man who has been composing for over 50 years and surely has no demons left to expunge, but in the company of Finland's tightest, even toughest, trio a 35 year break in solo recording sees him now stating some finely honed and not always so delicate musical truths.

Ahvenlahti himself has had a long career in the spotlight of mainstream Finnish music, working lengthily as the conductor of the Finnish Eurovision orchestra as well as providing music for some of the most successful local comedy films (check the Uuno Turhapuro series). Working here with the drummer Jaska Lukkarinen's Trio brings a strength to his music that has echoes of Ahvenlahti's pioneering work in the 1970s with cutting edge local musicians such as trumpeter Markku Johansson and bassist Pekka Pohjola.

However in general this is a thoughtful, poised selection of music that reflects the writer's own maturity, but equally the power of music to cross generational boundaries. The title track embodies the reflective attitude, and is anything but meditative. Most pieces seem to favor a minor key, not excepting the funky Minor Minor, but Ahvenlahti's humor as well as the tight accompaniment proves the power of music to keep listeners (and musicians) of all ages on their toes. Local artist Eeva-Riitta Eerola's cover painting 'Marcel' also will keep your eyes open!