By Dan Bilawsky
February 8, 2015
Sign in to view read count 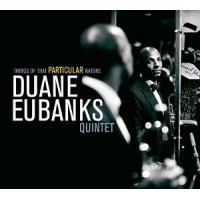 Things Of That Particular Nature is the record that the jazz world has been waiting for from trumpeter Duane Eubanks. My Shining Hour (TCB Records, 1999) and Second Take (TCB Records, 2001) put Eubanks on the map as a leader, positioning him as a purveyor of all manner of bop-derived music. He instantly came off as one to watch, but his voice was tied to the past on those releases, both through the material he covered and the debts that his sound betrayed. Now, with more than a decade of experience under his belt since those albums were released, Eubanks is speaking with a voice that's all his own.

The music presented herein is cool-headed and warm-blooded, sometimes all at once. Eubanks makes his mark as composer, having penned nine of the ten album tracks, and player, delivering performances that are strong yet level-headed and confident but never brash. Along the way, Eubanks pays tribute to the grounding forces in his life—his father, his wife, and his mentor, the late pianist-educator Mulgrew Miller—but he never falls into the sentimentality trap along the way. There's flat out groove music to be found ("Aleta's Dance"), smoky and moody after-hours jazz to absorb ("Aborted Dreams"), lighthearted waltzing to breath in (Miller's "Holding Hands"), and R&B-laced sounds to soak up ("Rosey"). There might be hard bop-esque drive behind one song ("As Is") and slow movement and gentle undulation beneath another ("Anywhere's Paradise"). In every case, the music sounds natural as can be.

The majority of the credit for this project obviously goes to Eubanks, but his band mates do plenty of heavy lifting along the way. Pianist Marc Cary is a soloist of seemingly endless means and resources, and a colorist with strong instincts; Abraham Burton proves to be a well-matched front line partner for Eubanks; Dezron Douglas buttresses the band at every turn; vibraphonist Steve Nelson shines on "Holding Hands" and "Aborted Dreams"; and one only need hear drummer Eric McPherson 's introduction and subsequent ebb and flow work on "Slew Footed" to appreciate his skills. But as good as the individual work is here, the simple act of group creation and movement often trumps individual contributions as Eubanks and company gel in fine fashion.