By JOHN KELMAN
September 8, 2004
Sign in to view read count 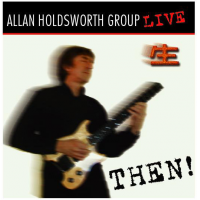 Recorded twelve years before his latest release, the similarly-live All Night Wrong , and at the same location in Tokyo, guitarist Allan Holdsworth demonstrates that while he's come a long way in the ensuing years, there's absolutely no reason not to look back at archival material such as this and stand in awe of a stylist who has singularly redefined the potential of his instrument. Then! captures Holdsworth and his band, keyboardist Steve Hunt, bassist Jimmy Johnson and drummer Gary Husband, during a three-night club date in 1990 when sparks were flying.

Holdsworth's reputation as a perfectionist has kept this performance out of the public eye for all too long, and so kudos is due to Chris Hoard and Derek Wilson of Alternity Records for ultimately convincing him to release it. One wonders just how many other recordings are sitting in the can, and how much coaxing it will take to get Holdsworth to release them. Shows like this would go a long way in satisfying Holdsworth fans, and keeping their interest in the long space between studio releases.

One of the immediate pluses about Then! in comparison to All Night Wrong , which is a trio disk, is the presence of Hunt. Using many of Holdsworth's original synthesizer patches, the group is able to pull off tunes from Holdsworth's Synthaxe period, including "Atavachron" and "Non- Brewed Condiment," with no loss of orchestral richness. Holdsworth has always had a personal sound on synths, and while Hunt clearly has his own playing style, having the Synthaxe patches available help keep the proceedings well within Holdsworth's sonic universe.

Any misgivings Holdsworth may have had about his performances on this date are purely his own; there's nary a misstep during the entire performance, and Holdsworth executes his signature blinding legato runs with the apparent ease and personality that make him an often emulated but never copied guitar hero. With compositions that date as far back as the mid-'70s Alan Pasqua tune, "Proto- Cosmos," from his time with the New Tony Williams Lifetime, and an instrumental version of "White Line" from his I.O.U. days, Holdsworth is in stellar form.

But as much as Holdsworth's own compositions dwell in their own harmonic space, what may be the most revealing tracks on Then! are the three "Zone" pieces, group improvs that bookend the recording and break it up in the middle. Rarely settling into any semblance of rhythm or groove, these are more textural works that demonstrate a group with its own take on free improvisation. While his style is clearly his own, Husband's debt to Tony Williams is clear, and it's difficult to imagine that the chops-laden Jimmy Johnson has also been the simple groove-meister of singer James Taylor's band for over ten years.

Then! captures Holdsworth at one of his many high points. With a new studio record in the making, and a two-disc compilation of his past work imminent on Alternity, Then! provides another perspective of a guitarist who has, quite literally, reshaped the face of the instrument.