By EYAL HAREUVENI
November 14, 2014
Sign in to view read count 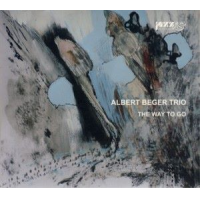 Israeli sax hero Albert Beger's new album presents this restless composer and ambitious improviser in two, schizophrenic forms. On one hand, The Way to Go features some of Beger's most impressive compositions, mostly written after his beloved mother's death, showing Beger as a restless musician who seeks to expand his compositional ideas and vocabulary as an improviser. On the other hand, he opts for the classic trio format he used on Hevel Havalim (Earsay's Jazz, 2003), and later with the elite rhythm section of William Parker and Hamid Drake (Evolving Silence, Vol. 1 and Evolving Silence, Vol. 2, (Earsay's Jazz 2005/06). This time he relies on a less versatile and diverse rhythm section—double bassist Assaf Hakimi and drummer Yoav Zohar, who regularly collaborates with Beger, as on Beger's Big Mother (Earsay, 2008).

This solid rhythm section, one of few to accompany Beger, rarely challenges him. At times Beger develops fascinating ideas with intense passion, as on the opening "Cost Of No Return" or the the touching "Eternity." They respond with an almost routine pulse that falls short of his ideas and versatile musical personality. The gap between Beger and the rhythm section is stressed even further on "Morton Feldman," a tribute to the great American composer known for minimalist, quiet and slowly evolving music including rhythms free and floating. Beger's bold musical vision attempts to send Feldman subtle ideas when he develops his solos, but the answer is only an aggressive rhythmic attack.

The rhythm section does connect when Berger uses a clear narrative for charismatic sax flights on "Black Cabaret," the title piece and even more on the propulsive "In The Zone." On the final cut, a tight, energetic foundation gains more power as the piece develops and manages to push Beger into a cathartic coda.

Beger's search for new ideas, formats and like-minded musical partners never stops. He is always ready to try a new experiment. From time to time the outcome is uneven, though still interesting in its bold vision.

Cost Of no Return; Black Cabaret; Morton Feldman; Eternity; The Way To Go; In The Zone.