Johnny Hartman: The Voice That Is! 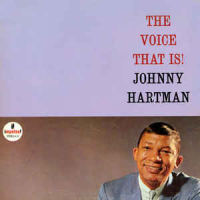 The lush baritone voice of Johnny Hartman enriched many big bands in the Forties and Fifties including Dizzy Gillespie's and Erol Garner's. But in the sixties he recorded many fine albums as leader and with all-star small groups. Although not as popular as some of his other releases, "The Voice That Is" is an exceptional showcase of his beautiful talent.

Hartman is clearly the central figure in this recording. He doesn't share the limelight with many soloists as on his other jazz-oriented albums of the same period. The backing music is wonderfully arranged by Bob Hammer in total support of his singing. "My Ship" starts with just guitar whose high voicing beautifully augments Hartman's deep voice. A good part of the bluesy "The More I See You" has Hartman in a duet with the bass. Several songs have a latin feel employing, by degrees: an acoustic guitar, marimba, latin percussion (including castanets) and an oboe, such as on "The Day the World Stopped Turning" and "Joey, Joey, Joey." Others have a standard quartet backing with guitar, bass, drums and great sensitive piano work by Hank Jones.

Hartman has a deeply resonant and clear voice. He very carefully articulates the lyrics giving life to the words he is singing. His forte is the ballad. On "My Ship" he wonderfully creates the dreamy and yearning quality of the song. His terse attack and slow release also wonderfully describes a passionate glance on "A Slow Hot Wind." He also changes to an effective blues style for "The More I See You." Hartman far exceeds the most important goal for a vocalist, to have a moving effect on the listener.

This recording is an wonderfully arranged and supportive showcase for Johnny Hartman's rich and full voice. It may not be as jazzy as some of his recordings, but leaning just a bit towards the popular style seems to bring out the best he has to offer. And a listen to this album should convince you his offerings are considerable.