Morton Feldman: The Viola in My Life 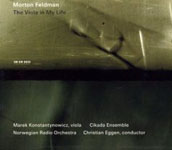 Composer Morton Feldman (1926-1987) is most often remembered for his spare, often slow and lengthy compositions, where space is a key component. Kronos Quartet's version of Piano and String Quartet (Elektra/Nonesuch, 1991) is a prime example of the richness and depth Feldman achieved through use of space and gradual, almost imperceptible evolution. While scored, Feldman's Indeterministic or Aleatoric music—where one or more aspect of the composition is left for the artist to define (Terry Riley's "In C" is another fine example), creating an unpredictability that was an inherent component of the music—has driven the vast majority of his work, especially in his later years. It's no surprise then, that among his students have been improvising musicians including drummer Bobby Previte, cellist Fred Lonberg-Holm and bassist Joëlle Léandre.

The Viola in My Life is ECM's first disc devoted solely to Feldman, and it's a strong choice. The four-movement, 39-minute suite places Polish-born, Norwegian-resident violist Marek Konstantynowicz front and center throughout, but in differing contexts ranging from the piano duet of "The Viola in My Life III" to the full orchestral conclusion, "The Viola in My Life IV." Konstantynowicz, while a member of Oslo's Cikada Ensemble and no stranger to ECM fans familiar with albums including The Source's The Source and Different Cikadas (ECM, 2002) and Mats Edén's sadly underappreciated Milvus (ECM, 1999), was active on Warsaw's free jazz scene before relocating to Norway; capable, then, of meeting the challenges of Feldman's musical proclivities.

Even when there's a full orchestra at his disposal, Feldman rarely resorts to bold, dramatic statements, barring the occasional punctuation. Instead, the Norwegian Radio Orchestra, conducted by Christian Eggen, creates textural and harmonic contexts for Konstantynowicz's reprisal of various themes introduced in earlier pieces, although sometimes considerably filtered Equally, Feldman's themes are often so oblique that completely recognizable definition can easily be missed.

The overall tone of these four movements is subdued, with little indication of time or harmonic movement (though there are passages with very dense, dissonant harmonies). Still, Feldman's genius has always been—to contrast one of the vocal lines to composer Steve Reich's You Are (Variations) (Nonesuch, 2005), "say little and do much,"—to "do little and say much." The first two parts of The Viola in My Life are for small, similar instrumental configurations. "The Viola in My Life I" features flute, violin, violoncello, piano and percussion, while "The Viola in My Life II" substitutes celesta for piano and adds clarinet, but these relatively slight changes create palpable transformations in texture.

The effect of Feldman's music, without proper attention paid can appear static and, at best, soothing on a subliminal level. But closer investigation into the starkly compelling The Viola in My Life reveals both an undeniable sense of purpose and an appreciation for the power inherent in the subtlest orchestration, the sparest melodic fragment and the true rewards of delayed gratification.