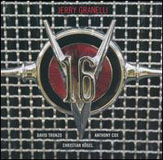 Judging by its grille and supercharged front end, Jerry Granelli's new thing is built to cruise. The V16 Project, a power quartet nominally under the drummer's leadership, has the potential to go any which direction. That it does, in its own peculiar way, restlessly shifting among styles and mixing them up to the point where you can't tell them apart (and to tell the truth, it doesn't matter anyway). Jazz purists, or purists of any kind, you better skip this one.

Guitarists Christian Kögel and David Tronzo both carry the electric and acoustic varieties—as well as a sampler each, so when you hear birds chirping, people talking, or church bells ringing there's no need for fear. Such a moment comes up on "Cassius," where bassist Anthony Fox emerges from the forest on an upbeat solo stroll. He keeps it limber and simple, which is just what the moment requires.

Kögel and Tronzo have a striking range between the two of them, the former tending toward a more pointed sound and the latter usually smooth as butter. When it's time for a lyrical moment, they meld together into ripples and swirls, as on "O Bossa, Where Art Thou?" (Completely unrelated to any Brazilian bluegrass connotations, don't worry.) On the eponymous acoustic duo, they shift adeptly from rambling harmonies directly into the blues, Tronzo sliding away on the steel while Kögel does a banjo thing underneath. Then on to a folky funk and out.

Granelli himself certainly makes no unncessary gestures, and at no time does he ever nudge anyone out of the way to hear himself play. When he does step in, it's for the purpose of synergy and support. The drums are not a lead instrument, but they're sure as hell important when you need the right flavor of groove (or un-groove, as necessary). Whether on a country-rock of "Family Man," the deep rumbling funk of "Texas Oklahoma Conspiracy," or the headbanging jam of "Black Confederacy," he's got it covered. The 11 minute opener gets deep into interlocking rhythms, which seem to be Granelli's favorite place to dwell.

Everyone pitches into the composition, as would be expected given the looseness of this configuration. The V16 Project, like a lot of refreshing improvisation these days, takes a roots-punk orientation toward the music. Do it yourself, play it for real, and don't for a second let pretention get in the way.

Visit Songlines on the web. This disc comes in the hybrid SACD format, so if you have the special gizmo you can enjoy multichannel surround sound.