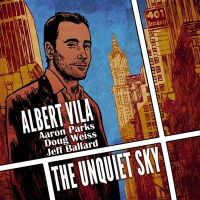 Belgium-based Spanish jazz guitarist Albert Vila delivers his fourth album as leader with The Unquiet Sky, offering a tad more music than a standard album with a presentation of fourteen original compositions of modern-styled jazz that's quite appealing. There's little question whose recording this is as the leader's electric guitar voice becomes the center-piece of the disc from the opening tune.

Introducing the music with an inviting solo on the beginning "Therefore," Vila leads the group on an adventuristic musical journey through the modern side of the jazz spectrum revealing his talents as a composer with challenging charts like "New Deal," the perky "Gym Jam," and the light atmospheric "Air," just to name a few.

Sounding much like a hard-rock disciple, Vila opens up in rough style on the dark-textured "Three Days After" with strong riffs and a hard beat while, the following brief "Beginning," comes across in warm colors with pleasant soft solo statements from the leader. When you have plenty of music to offer, there will always be many tracks that will draw your attention and there are several defining pieces on this recording of which, the swinging "Old Recipe" is one, offering distinct voices of guitar, piano, bass and drums all in terrific form.

The music ends with two more of those defining tunes: "Major Issues" and the most ambitious and finale piece of the set, "The Bean" where Vila's solos are the most expressive as his band mates weigh in with splendid moments of their own especially young Parks whose aggressive key work is more than complimentary to the leader.

There's no standards, no ballads and no bebop here but that's what makes Albert Vila's The Unquiet Sky so special as the guitarist and renowned crew, forge an impressive well-designed escape from the traditional side of jazz in favor of exploring the more creative and challenging aspects of modern music.