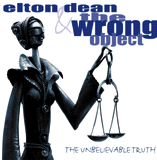 Poignant doesn't cover it. This was one of Elton Dean's last gigs before his death and all the qualities that made him such a distinctive voice on alto sax and saxello—his wit, his ascetic, unsentimental lyricism and the like—are caught in abundance and in the company of a band who do a whole lot more than simply provide a framework for his invention.

"Millennium Jumble (The Wrong Object)" is a case in point. Dean's saxello work in particular was always marked by a certain leanness, as if he'd gone to the trouble of purging his playing of unnecessary diversions, and his solo on this one is an example of that.

The spirit of Soft Machine comes to the fore on "Cunnimingus Redux," where the classic line-up of Dean, Mike Ratledge, Hugh Hopper and Robert Wyatt is evoked through the band's uncanny ability to evoke that band's exploratory way at the same time as they bring their own virtues to the table. Trumpeter Jean-Paul Estievenart turns a solo in on this one in which the individuality of his musical conception is only too obvious.

Dean's "Baker's Treat" is, rather like his composition Blind Badger an example of how lyrical his lines could be, and again his saxello playing is an example of how valuable a musical asset the ability to just play a line can be. The band is happily with him all the way, and credit must go to bassist Damien Polard and drummer Laurent Delchambre for the deftness of their accompaniment.

Odd though it may sound, Dean had something in common with James Spaulding. The link was strong enough to transcend their idiomatic differences and it laid in the fact that as musicians who doubled they both intrinsically grasped the fundamental differences between their instruments of choice. Thus Dean's alto sax work on "The Basho Variations" is some way removed from his saxello work because he had long since understood the differences between the two horns. That ever-present acidic tone is in place, but informed by softness that was once perhaps conspicuous only by its absence.

This is a document of a questing spirit going out on a high. It serves to highlight how infrequently that happens, especially as the music is an example of fusion on one of those equally rare occasions when self-indulgence isn't on the agenda.