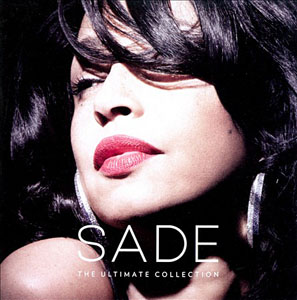 Did the world really need a new Sade "best of" album? Possibly, since it has been 17 years two albums of new material since The Best of Sade (Epic,1994). The timing of The Ultimate Collection is in no small part related to the fact Sade is off on her first world tour in a decade; since Soldier of Love (Epic, 2010) is a year old now she needed to put out "new" product to whet the appetite of the fans.

Despite there being twice as many songs on The Ultimate Collection , there is still some noticeable padding, including three unreleased (and mostly unremarkable) tracks and two remixes, including Sade's first collaboration with another artist other than her typical band mates. Unfortunately, her choice of rapper Jay-Z is a trainwreck of two totally incompatible styles.

All the expected hits are here ("Smooth Operator," "Hang On to Your Love," "Never As Good As the First Time" "No Ordinary Love"), while "Like A Tattoo" and "Please Send Me Someone to Love " are replaced with "Feel No Pain" and "Bullet Proof Soul," from Love Deluxe, five tracks from the leaden Lovers Rock and three from Soldier of Love.

The Lovers Rock inclusions are a small mystery, but a bigger one is why three of its best songs, ("Lovers Rock," "Somebody Already Broke My Heart," and "Every Word") aren't here while three of the sparsest tracks, ("Flow," "King of Sorrow" and "The Sweetest Gift") are.

The three "new" songs are likely leftovers from the Solider of Love and Lovers Rock sessions, though the track information doesn't make it clear. "Still In Love" is a ballad by the late Thin Lizzy front man, Phil Lynott—okay, if not particularly dazzling. "Love is Found" has a bit more energy, along the lines of "Soldier of Love"; Sade delivers it with her customary world-weariness, but it's far superior to "I Would Never Have Guessed," a trite trifle which should have stayed locked in whatever vault it was left in.

Why Sade decided her first collaboration with another artist should be Jay-Z is anyone's guess (was Beyoncé busy?) , but it's is obvious that they were never even in the same time zone when he added his pointless contribution to the remix of "The Moon and the Sky." Sade has never cared about trends before, and the "rent-a-rapper" gimmick has become commonplace. If she really wanted to create a buzz, she should have whistled up a true peer like Prince or Maxwell.

There are no liner notes beyond detailing musicians, producers and studios; no observations from The Lady herself, or a hired essayist to muse about the larger meaning of Sade's music; only two photos of Sade in the eight-page booklet and none of her band mates. The Ultimate Collection could have lived up its title with less skimpy packaging and by finally collecting one of Sade's few genuine jazz performances, "Killer Blow," from the 1986 film Absolute Beginners.

No such luck. As things stand, a more accurate title would be The Adequate Collection because there's little ultimate about this bare bones piece of product..

Your Love Is King; Smooth Operator; Hang On to Your Love; The Sweetest Taboo; Is It A Crime; Never As Good As the First Time; Jezebel; Love is Stronger Than Pride; Paradise; Nothing Can Come Between Us; No Ordinary Love; Kiss of Life; Feel No Pain; Bullet Proof Soul; Cherish the Day; Pearls; By Your Side; Immigrant; Flow; King of Sorrow; The Sweetest Gift; Soldier of Love; The Moon and the Sky; Babyfather; Still In Love With You; Love Is Found; I Would Never Have Guessed; The Moon and the Sky (remix featuring Jay-Z); By Your Side (Neptune's Remix).