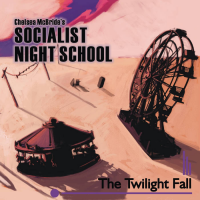 As is the case with her largely anomalous music, composer / arranger Chelsea McBride's Toronto-based Socialist Night School is less a brick-and-mortar academy than a malleable concept, open to almost whatever definition the viewer (or listener) has in mind. McBride doesn't simply "write" music, she "sees" it, much as a painter visualizes what is to adorn a canvas; thus the Night School's second album, The Twilight Fall, represents, in the words of Daniel Jamieson's liner notes, "an aural expedition through life, from birth to death."

That's a tall order indeed. And as it has been a long time since big-band music was considered a matter of life and death, it takes some getting used to. McBride sets forth in the album jacket a "compositional narrative," which is "how [she] would like the listener to envision each tune." Okay. Using that as a starting point, there is at least one listener who, try as he may, has been unable to see or hear anything more than a nineteen-piece band performing a series of innovative tone poems that could mean almost anything—this in spite of the fact that half of the album's ten numbers include vocal guideposts by Alex Samaras . Trouble is, her enigmatic lyrics do little to undergird McBride's purpose, however earnest and well-designed it may be.

Setting aside the music's narrative viewpoint, what remains is a series of sharply written contemporary essays that should please those whose receptivity leans toward the avant-garde. There is no denying that, at age twenty-four, McBride is an uncommonly talented composer and arranger. Whether her graphic themes strike an emotional chord with listeners is another matter, one that depends in part on their acceptance of music that is explicitly modern in concept and execution. The ensemble is admirable, the soloists by and large well-spoken (as is Samaras). As an aside, the recording was made on trumpeter Brownman Ali 's Browntasaurus label, whose artists receive 100 percent of the profits, Browntasaurus zero. Three cheers for that.

Ambleside; The Twilight Fall; Smooth; Spirits; Arrival of the Pegasus; Foot in Mouth; In Dreams; Ambleside (reprise); Something Simple.