Duke Ellington And His Orchestra: The Treasury Shows Vol. 17 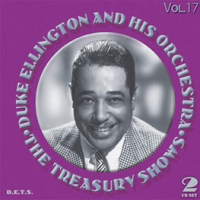 Don Lowe's exultant cry, "Here he is, and in person, the Duke himself!" kicks off the 17th of the Duke Ellington Treasury Show radio broadcasts, part of a massive reissue project by the Danish Storyville label.

Anxious to show how hip, perhaps even hep, he is, the American Broadcasting Corporation announcer goes on to introduce "C-Jam Blues" as a number that's "really here to stay, but solid."

In contrast, Ellington behaves with quiet dignity, at one point movingly evoking the image of a dead GI looking in on a world at peace and benefiting from the purchase of the U.S. Government's "victory bonds." The purpose of the Treasury Shows was to boost these bonds.

The shows provide a marvellous, oblique look at history. At one point Lowe plugs a live broadcast that is coming up, direct from Pearl Harbour.

Musically, there are highs and lows. Among the former are "Way Low," featuring Harry Carney's baritone saxophone, a high octane "Riff 'n' Drill," with solos by Lawrence Brown and Johnny Hodges and a nice version of "Just A-Sittin' And A-Rockin.'" "Circe," on CD2 is a rarity. Only one other version exists.

Among the lows are Kay Davis warbling Rodgers and Hammerstein's "If I Loved You" to Billy Strayhorn's ultra-straight piano accompaniment and The Mellotones' gruesome kitsch version of "Caldonia." By comparison, Al Hibbler is—for once—quite bearable on "I'm Just A Lucky So And So." Joya Sherrill was always good news, though Lowe irritatingly insists on labelling each performance by her as "joyous."

Was it Ellington's share of the lyric of "The Wonder of You" that boasted of having "played golf in Indochina?" Don't laugh: Ducal aficionados can agonize for hours over such questions. Controversy still rages over the identity of the bassist on "Air Conditioned Jungle"—Oscar Pettiford or Al Lucas?

CD 2 of this set features numbers recorded at the Chicago Opera House in 1946 and the Hurricane Restaurant in New York in 1944. The sound is nowhere near as good as the actual Treasury shows. Neither, believe it or not, are the announcers. Come back, Don Lowe, all is forgiven... but solid.

Tracks: CD1: Take The “A” Train; Way Low; C-Jam Blues; The Kissing Bug; Just A- Sittin’ And A-Rockin’; Caldonia; Fancy Dan; I’m Just A Lucky So And So; The Last Time I Saw You; On The Atchinson, Topeka And Santa Fe; If I Loved You; I Can’t Begin To Tell You; The Wonder Of You; Riff ’n’ Drill And Close; Do Nothin’ Till You Hear From Me; It Don’t Mean A Thing If It Ain’t Got That Swing; Things Ain’t What They Used To Be; San Fernando Valley; Suddenly It Jumped; Summertime (incomplete); On The Alamo. CD2: Caravan; Rugged Romeo; Sono; Air Conditioned Jungle; Circe; Rhapsoditty; Fugueaditty; Jam-A-Ditty; Magenta Haze; Diminuendo In Blue, Transblucency, Crescendo In Blue; Pitter Panther Patter; The Surburbanite; Boy Meets Horn; Jump For Joy; Three Cent Stomp (incomplete); Solid Old Man; How Blue The Night; Ring Dem Bells.