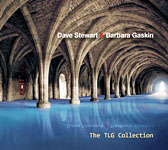 With momentum building in recent times for once progster, now popster Dave Stewart and longtime partner, vocalist Barbara Gaskin, it only makes sense to keep it going. With reissues of the groundbreaking keyboardist's work with Canterbury faves Hatfield and the North and National Health, archival live and radio recordings from Hatfield and the earlier, no less seminal Egg, not to mention a new CD and EP from Stewart & Gaskin—Green and Blue and Hour Moon, both released in 2009 on Broken Records and the duo's first new recordings in nearly 20 years—there's an audience who, with memories rekindled, are eager to snap up anything they can get.

Making The TLG Collection a welcome release. Originally sold briefly in Japan during a 2001 tour, it's a great introduction for those new to Stewart & Gaskin's "pop music for adults" and a collectible for existing fans who missed the chance to grab its original release. Material dates back to Stewart's "Fear Is The Thief," recorded in 1983 and previously only available on the Japanese edition of Spin (Broken, 1991). Recent songs include theme music to the 1997 TV show Ad Infinitum, and a solo version of the lyrical and highly memorable "Your Majesty Is Like A Cream Donut (quiet)," from Hatfield's classic The Rotters Club (Esoteric, 1975). A 1996 remake of the up-tempo rocker, "Henry & James," from Up From the Dark (Broken Records, 1985) opens with a quirky intro that's no surprise to those familiar with Stewart's singular sense of humor.

Were he dead, Bob Dylan would surely be turning in his grave to the thundering drums and techno-ish dance-floor version concocted on "Transylvanian Blue Suede Hooves," an extended take of the same "cruelly distorted" (Stewart's words) cop of the songsmith's "Subterranean Homesick Blues" that first appeared on The Big Idea (Broken Records, 1990). More reverent—and moving—is the duo's reading of Paul Simon's gentle "René and Georgette Magritte With Their Dog After The War." A 2001 rough mix of the iconic '60s hit "Shaking All Over" begins with a cinematic and undeniably progressive intro that does little, however, to foreshadow the pulsing rock-and-roll to follow.

Stewart's arrangement of the traditional "McGroggan" gives Enya a run for her money, not just because Gaskin's voice is equally attractive, but because the keyboard orchestrations possess greater depth, seamlessly leading into Stewart's more eminently dramatic "When the Warcry Comes."

There's plenty of Stewart the soloist to be had too, including his virtuosic solo on the groove-happy "Fear Is The Thief" and orchestration on the instrumental "The Curve of the Earth," the disc's proggiest track, despite being originally composed as an overture to The Byrds' classic "Eight Miles High," which only shows up here on the fade-out.

With Green and Blue a first step towards fuller reconciliation between Stewart's progressive roots and later pop proclivities, The TLG Collection is a strong addition to the Stewart & Gaskin discography, and an interim appetite whetter for more new music from one of Canterbury's most important figures.

Transylvanian Blue Suede Hooves; René and Georgette Magritte With Their Dog After The War; Shakin' All Over (2001 Rough Mix); Give Me Just a Little More Time; McGroggan (1995 Remix); When the Warcry Comes; Fear Is The Thief; Hold On To The Chain; Roads Girdle The Globe (1991 Remix); Henry & James (1996 Remake); The Curve Of The Earth; Painter Man; Your Majesty Is Like A Cream Donut (quiet); Ads Infinitum.