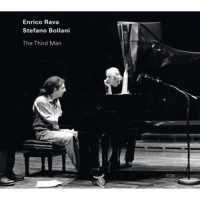 Italian trumpeter Enrico Rava and pianist Stefano Bollani have been collaborators for more than a dozen years and the dynamism of their close association is evidenced on their exquisite new duo CD. These two virtuosic and supremely focused performers need no third man to round out their evocative, often introspective and always superb playing on this recording, which features two very different but stunning renditions of Antonio Carlos Jobim's "Retrato Em Branco Y Preto," works from another Brazilian, Moacir Santos, and Italians Bruno Martino and Bruno Brighetti as well as Rava and Bollani originals (they share composer credit for the title track, a nod to the Orson Welles suspense movie).

For the first set of their Feb. 23rd 2008 New York Birdland performance to celebrate this release, as well as the approach of another recording to be realized in a studio soon after, Rava and Bollani enlisted the help of a third, fourth and even a fifth man, top veterans all: bassist Larry Grenadier, drummer Paul Motian and versatile boundary-pushing saxophonist Mark Turner. In a program that included several pieces not from the album and which was somewhat less moody and more rambunctious than the recording, everyone came out swinging and fully supportive of Rava and Bollani's joint vision and sound. Showmanship was also fully operative, the senior Rava with his long flowing hair and the younger animated Bollani providing visual contrast as well as interludes of humorous introductions. (In addition to being a supremely talented keypuncher, Bollani is also known as a quite the cut-up) Motian's active approach, Grenadier's solid bass and Turner's top-flight musings kept everybody in harmony.

But as the duo numbers from the live show demonstrated, the sparer pairing of Rava and Bollani prove the old maxim that less can be more. Their exceptional musical rapport and highly developed individuality in both playing and personality prove more than sufficient to satisfy even the most demanding of listeners. With Rava sometimes getting his clean clarion trumpet to sound like a trombone and Bollani lightly skitting over his keyboard in intricate fast runs, their sound feels pristine and unique.