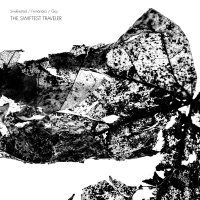 A trio of exploratory and quick-witted improvisers unite for an exciting and stimulating outing on The Swiftest Traveler. Norwegian reedman Torben Snekkestad and Catalan pianist Agusti Fernandez are comrades of bassist Barry Guy in his The Blue Shroud Band and also the 2020 edition of the London Jazz Composers Orchestra. The three familiars forge an alchemical transformation of disparate sounds into music, abstract in the sense of Miro rather than Pollock, in that its assembly hails from recognizable fragments.

All operate beyond the conventional bounds of their instrument's capabilities. Snekkestad draws an astonishing range from his reeds, alternately sinuous, plosive, whistling and spluttering. Fernandez remains largely content to patrol the keyboard, calling forth repeated motifs, ringing tremolos, and pummeled snags, as well as incorporating preparations such that the well-tempered voicings dissolve into metallic clanking. Guy's technique would be astounding enough regardless, even without the variety of supplementary implements he co-opts to broaden his vocabulary.

The trio revels in texture and timbre, and the ultimate product derives from the sonic collisions of their oblique responses. The sonorities of reeds and bass mingle at the extremes so as to become indistinguishable, as do the sources of some of the twanging noises—piano strings or bass? The upshot is tension in abundance, rich in detail. Nonetheless similarities in tempo and phrasing prevail. They result in eruptive bursts of activity, separated by silent pauses in "Both Directions," otherwise notable for their energy and attack, or juxtaposed against continuous sustained pitches, particularly Snekkestad's split tones on the title track.

Fast moving dialogue in which everyone participates sums up the group aesthetic. They promote the whiff of abandon, while remaining in total control. However, such high octane exchanges come spiced with hushed passages on "Sway," where the tinkles, mumbles and scuffs build up to a crescendo of clipped notes, careening sawing and multiphonic tenor gurgles. Quieter episodes similarly emerge on the aptly named "Slip, Slide & Rattle" (with its allusions to Snekkestad and Guy's duo Slip, Slide And Collide (Maya, 2014)) where they provide a series of contrasts with the murky opening and subsequent sudden explosions.

Then on the final cut, lively unfettered interplay opens into a stately reading of Paul Hindemith's beautiful melancholic "Interlude" (part 19 of his "Ludus Tonalis"), as if to say it's all part of the same spectrum and we can do this as well when we wish.