A fantastic atmosphere enveloped Dalston's Cafe Oto with whoops and shouts of affirmation greeting every inflection and chant as the Sun Ra Arkestra launched into "Interplanetary Music," with vocal interjections erupting from all corners of the bandstand. With their colorful kaleidoscopic costumes, Cafe Oto decked out with extra lights and a spangly backdrop, and infectiously joyful music, it was impossible not to beam with pleasure at the almost overwhelming spectacle. Twelve musicians crammed into the stage area and the full house audience packed into the remainder of the space. It was the final night of a sold out three day residency and everyone was determined to have a good time. 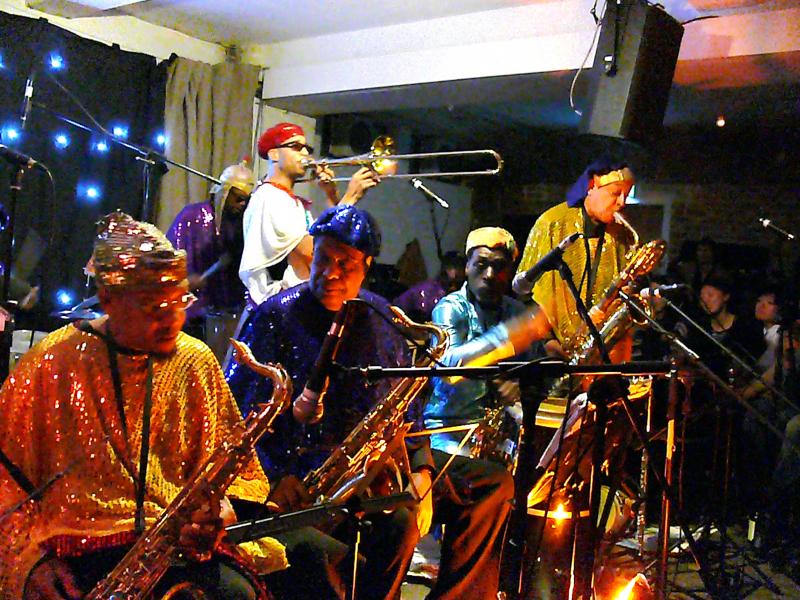 Since Sun Ra departed the planet in 1993, the Arkestra has thrived under the direction of surviving founder members, first John Gilmore, but since 1995 reedman maestro Marshall Allen. Not only has Allen maintained the legacy but he has also furnished new material and rearranged classics from the band book. All told an extraordinary achievement given the inclement economic climate not conducive to supporting even small bands on the road let alone an entire orchestra.

After such a wonderful start with bustling instrumental breaks, the band charged into a surging "Discipline 27/I'll Wait For You." Unsurprisingly neither band nor audience could sustain the tremendous initial energy levels, and momentum flagged slightly with a succession of vocal numbers. Few ensembles possess such range as the Arkestra who span all the way from '30s Swing era big band pomp right up to New Thing squalls. And they have a great back catalog to dig into. Allen sported a two inch thick folder bursting with charts from which he selected successive pieces. Indeed some of the band spent half a tune sorting through their papers to find the correct sheet, then gave up and just played anyway.

Later highlights from the first set included the paradoxically polished yet off kilter swing of "Saturn," a Sun Ra composition which first entered the repertoire in 1956. Remarkable to consider that Allen has been playing this piece for over 50 years! Duke Ellington's "Drop Me Off In Harlem" with a rapped intro and subsequent vocals from Knoel Scott also featured a fine Michael Ray trumpet solo and a lithe tenor saxophone excursion from another original member Charles Davis. Ra's "Space Idol" was a wild free for all, introduced by Juny Booth on bass, before Allen's EVI squiggles prevailed, then a squealing alto outburst from the leader above complete horn mayhem, and a spontaneous dual between Yahya Abdul Majid wailing on tenor saxophone and Dave Davis' blustery trombone. 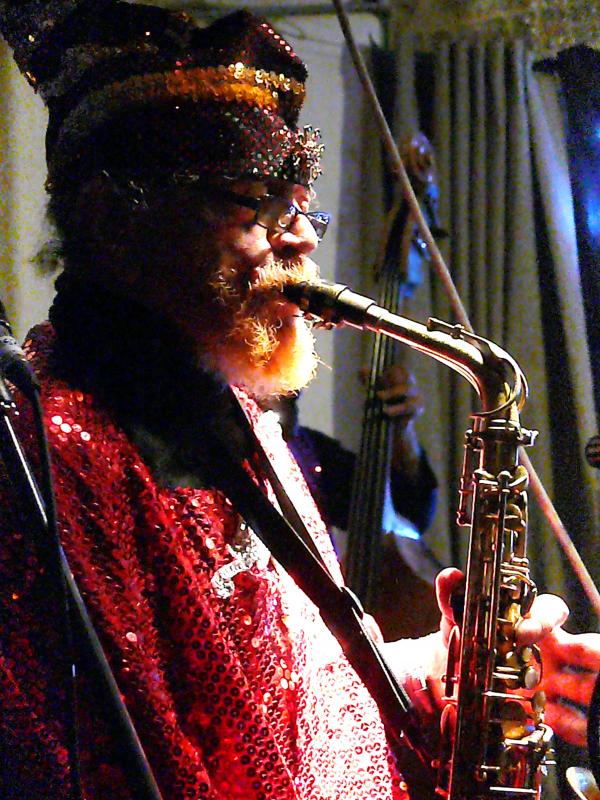 Resplendent in sparkling red robes, Allen commanded the stage from front left, orchestrating, directing, and choosing soloists. He was full of energy at 85 years old, and needed it as the Arkestra presented two typically far reaching sets totaling nearly 165 minutes. Nearly all of his solos, like everyone else's, were short and succinct. To hear Allen at his most expansive you generally have to track him down outside the Arkestra, but it's well worth the effort, whether finding him exploring his impulsively lyrical side on his first leadership date with altoist Mark Whitecage Mark-n-Marshall (CIMP, 1998) or more experimental on his most recent vehicle the astonishing Night Logic (Rogue Art, 2010) with pianist Matthew Shipp and bassist Joe Morris.

Allen remains the Arkestra's most fiery soloist, but he was also very accomplished inside as demonstrated by way of a sublimely tender soliloquy on Chopin's "Opus 27," though interspersed with increasingly astringent outbursts, as the horns massed in support. Ray proved an inspired and incisive soloist in addition to acting as compere, while Majid handled lead tenor duties with quiet assurance. Scott contributed sinuous alto saxophone alongside his vocals, and Danny Ray Thompson's baritone sax took a break from underpinning to enjoy the spotlight on "Stars Fall On Alabama."

Undoubted highlight of the second set was an amazing driving "Angels And Demons At Play." First appearing on the eponymous album in 1965, it is one of the few Arkestra originals not written by Sun Ra, credited to Allen and bassist Ronnie Boykins. It began as a seemingly impromptu guitar and percussion riff, soon layered with contrastingly slow reed and flute lines, combining to hypnotic effect in an excellent extended groove. Fred Adams fragmented trumpet duet with Allen's flute was particularly noteworthy. Fletcher Henderson's "Big John Special" received a very tight reading, with syncopated trumpets and trombone in a lovely arrangement. A concluding medley, bizarrely starting with "Forest of No Return" from the 1961 Disney film "Babes In Toyworld," but more expectedly traversing "Space Is The Place" and "We Travel The Spaceways," saw everyone gradually space hop off the stage to ecstatic applause. Nonetheless only a reduced size contingent could be enticed back for a brief "Hit That Jive Jack," and then they were gone.

Well not quite. Due to the volcanic ash cloud, the Arkestra were stranded at Heathrow so Cafe Oto scheduled a supplementary benefit appearance five days later to cover the not inconsiderable costs of keeping the musicians going while waiting to get home. For those who missed the performances the recent Live At The Paradox (In And Out, 2009) gives an accurate indication of what to expect these days, but there is even better news: the Arkestra returns to Cafe Oto for a further two day residency in early July 2010.