Tim Berne: The Sublime and... 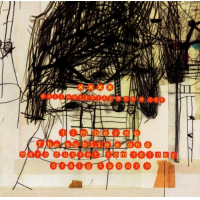 Tim Berne's The Sublime And... —his second album for Thirsty Ear's Blue Series—captures the raw energy and improvisational prowess of his working band, Science Friction. Bringing together the musicians from his bass-less trios (Big Satan and Hard Cell), Science Friction consists of Berne on alto saxophone, Marc Ducret on electric guitar, Tom Rainey on drums, and Craig Taborn on Fender Rhodes, laptop, and virtual organ. Producer David Torn, a virtual fifth member of the band, mixed and mastered the recording, which sounds well-balanced and each musicians' voice is clearly heard.

But it's the performances that count, and the 110 minutes of music on the two-disc set delivers. It jumps off with the insistent groove of "Van Gundy's Retreat," a new tune, emblematic of Berne's style—a repeating melody line is deconstructed by the group into its disparate threads, explored, then rebuilt. Berne hangs on high alto notes that challenge the limits of tension and harmony. The introduction to "The Shell Game" offers a break with its minimalist, atmospheric melody. Taborn chooses sounds that imply the bottom end, without necessarily playing bass lines. He and Rainey set up a driving, rock rhythm ripe for Ducret's slashing solo. "Mrs. Subliminal" is a sprawling piece that dances around musical themes before segueing into the more tightly constructed "Clownfinger," a classic Berne riff that the band locks into. Berne's and Rainey's extrapolations of the theme are explosive.

Disc two starts with "Small Fry," a Taborn solo reworking of the tune "Sigh Fry" from Science Friction. Taborn gives a simultaneously growling and melodic performance on "Jalapeño Diplomacy/ Traction," comping himself with distinctly different sounds. The tune also highlights tight ensemble playing and a nearly lyrical Berne playing over the melody. The final piece, "Stuckon U (for Sarah)," also features group interplay and an extended range of dynamics and textures.

The Sublime And... is a strong addition to the Berne catalog, sure to be welcomed by fans. And for newcomers, it provides a nice entry point, displaying Berne's compositional and playing aesthetics with longtime musical cohorts.