The Story: The Story 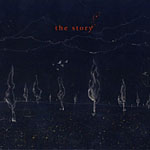 From its opening notes to the stop-on-a-dime ending, this debut album is an exhilarating shot in the solar plexus. A talented quintet serves up a diverse roster of tunes daring in both imagination and execution.

Pianist John Escreet uses his repeated eight-note figure in the song "Misconception of Life and Death" as a starting point for more dazzling and emotional playing. Tenor saxophonist Samir Zarif plays flowing, deep-voiced riffs while altoist Lars Dietrich passionately throttles the upper register. Zach Lober's electric bass growls like a troll and Escreet plays like a demon possessed on the driving "Regen Staat," pushing the song toward its climactic Tommy Gun bridge. Dietrich's and Zarif's call and response highlight the mischievous rondo "One Two Three" and even the ballad "One Essential Phrase," with beautiful solos by Lober and Escreet, has a vigorous coda.

There are musical echoes on this disc, too. The stark, impressionistic landscape of "Influence" includes distorted electronic vocal effects that recall Charles Mingus' subterranean grousing on "Passions of a Man." The spiraling, pulsating opening of "Gullin Bursti" sounds like a Phillip Glass composition and the group plays what is definitely its most straight-ahead bop tune with striking muscularity.

With drummer Greg Ritchie's rhythmic intensity, Escreet's restless explorations, Lober's heartbeat, Dietrich and Zarif's pas de deux, The Story has a singular and refreshing sound that ought to be a staple on the jazz scene for many years.