Home » Jazz Articles » Gary Alesbrook: The Stories We Tell Ourselves

Gary Alesbrook: The Stories We Tell Ourselves 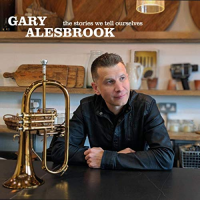 It's hard to believe this is only trumpeter Gary Alesbrook's second record under his own name. Like Venus emerging fully-formed from the head of Zeus, Alesbrook's tasteful proficiency is truly startling until you realize it was honed outside of jazz, with years of busy sideman efforts in other types of music.

Another surprise is that while The Stories We Tell Ourselves contains all-original tunes, they are actually very good ones. Such collections often mean the kiss of death for artists; although it's understandable when they chafe at playing yet another "Body and Soul" and want to offer something totally theirs, not everyone belongs in the American Songbook (or any other songbook, for that matter). Truth be told, few players can assemble a high-level and thoroughly enjoyable recording of just their own songs.

But Alesbrook can (full disclosure: three of these eleven tunes were co-written). From his opening homage to Louis Armstrong ("For Louis"), each track is melodic and unique, whether it swings or dreams. "On My Way" has a tropical flair; "Fiddlesticks" goes flat-out bop, with a terrific solo by electric guitarist Matt Hopkins; and "Just One More Thing" is less Columbo and more Dizzy. "Anna" was written for Alesbrook's girlfriend and is played full of heart, with luscious commentary by pianist Anders Olinder and bassist Adam King.

Alesbrook is an evocative composer and arranger. For instance, "Last Orders" nicely conjures the laid-back, satisfied mood of closing time at a club; you can practically see them stacking the chairs. Alesbrook is also a warm and lyrical player who respects space instead of cluttering up every bar with notes, just to prove that he can. But there's no doubt about chops here, not with him or any of the other musicians. And true to his sideman heritage, Alesbrook leaves room for many fine solos all around.

Four compelling vocal tracks are included, such as Raul Midon's soulful "Precious Love," sounding like a tribute to the great Marvin Gaye. "Key Lime Pie" is a jubilant love song that's more about a woman than a dessert, featuring the velvety voice of Elliott Cole and fine solos by bassist Adam King and drummer Ian Matthews. "Going Home" showcases the sensuous singing of Phoebe Jane, while the luxurious ballad "Fallen Star" belongs to Phil King. On "My First Love," the languid, romantic duet between Cole and Victoria Klewin, Alesbrook's solo is so expressive that it's practically verbal.

This is an excellent record. And since most of these musicians have yet to become familiar names in jazz, The Stories We Tell Ourselves is full of happy discoveries all around.

Title: The Stories We Tell Ourselves | Year Released: 2019 | Record Label: Self Produced