Home » Jazz Articles » Steve Turre: The Spirits Up Above

Steve Turre: The Spirits Up Above

By John Kelman
October 9, 2004
Sign in to view read count 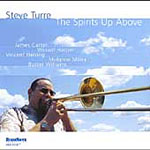 You have to have a lot of nerve to pay homage to Rahsaan Roland Kirk. Soul-drenched, steeped in the blues yet progressive in ways that were not to be fully appreciated until after his untimely death in '77, Kirk's music managed to be a bundle of contradictions while, at the same time, a cohesive statement about the true jazz experience. And while more space was often devoted to his eccentricities—playing multiple horns at once, dressing flamboyantly, as much a visual performer as a player—the reality is that Kirk, whose capabilities ranged from Dixieland to free jazz and everything in between, was arguably one of the most creative musicians of his time.

Trombonist Steve Turre not only met Kirk as a teenager, but ended up on the stage with him any time Kirk was in the Bay Area where Turre was growing up, and later again when Turre had relocated to New York. And so it is that Turre is in a unique position to re-evaluate the music and performances of Kirk, and deliver up The Spirits Up Above , as honest and heartfelt an homage as is possible.

With an all-star cast including saxophonists Vincent Herring and James Carter, found here in a setting that eschews his tendency to shtick in his own work, along with pianist Mulgrew Miller, bassist Buster Williams and drummer Winard Harper bolstering the rhythm section, Turre has formed a band that is completely capable of running the gamut of Kirk's material, from the up-tempo swinging blues of "Three for the Festival" to the tender balladry of "Stepping into Beauty," and from the soulful title track, complete with vocal chorus to the modal 5/4 romp "Hand Full of Five." With most pieces running in the four-to-five minute range, the arrangements are tight and the solos, while effusive, are kept short and to the point.

In a setting where every player gets to shine, special mention needs to be made of Carter, whose brash tenor solo on "Hand Full of Five" comes closest to capturing the free spirit that was Kirk. But whereas his own work sometimes feels overly considered and contrived, it is clear that here he, like the rest of his bandmates, are just having a whole lot of fun. As entertaining as this record is, the group must be positively incendiary live.

Kirk, as a performing musician, proved that there didn't have to be a gap between the audience and the players, that the experience was truly meant to be a shared one, rather than an elite meeting of musicians to which the audience was fortunate enough to be privy. Turre and his group manage to capture that same spirit of collaboration. The best music is meant to be a true symbiosis, and The Spirits Up Above goes a long way to breaking down any invisible barriers between those who play and those who listen.

Visit Steve Turre on the web.

Three for the Festival; One for Kirk; Medley: Serenade to a Cuckoo/Bright Moments; Stepping Into Beauty; The Spirits Up Above; Hand Full of Five; E.D.; Dorthaan's Walk; Volunteered Slavery