Jane Fuller: The Spirit of Giving

BY JIM SANTELLA
November 22, 2006
Sign in to view read count 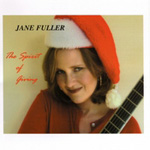 'Tis the season. It's time to celebrate with good music all around.

With this Christmas wish, jazz singer Jane Fuller interprets traditional songs as well as creative originals in a warm program that sets the holiday mood out for all to share. Each arrangement comes with a pleasant swing and plenty of comfortable motion. Bossas, ballads and blues mix with traditional songs to warm the night.

Fuller's "When Angels Sing 'Good Night', a passionate and deeply felt acoustic blues, features pianist Alan Steinberger, bassist Randy Landas and drummer Rod Harbour. The cohesion that exists between singer and band brings a sparkle to the performance. Similarly, Fuller's contemporary blues Can You Give it To Me? provides an earthy wakeup call that opens the door for the holiday season. Her clever lyrics and persuasive storytelling give this piece a strong emphasis. Pete Snell's dramatic guitar lends considerably to this selection and most of the others.

Four of Fuller's eight originals are in 3/4 time, making them relaxed Christmas waltzes. She and the band place their focus on sending out the proper message for the holiday season. The session contains several standout selections; the best among them is "God Rest Ye Merry Gentlemen, with a hip, comfortably driving beat. Once again, Snell's guitar adds immeasurably. The same is true with her interpretation of "I Saw Three Ships, which features Lee Thornburg's fiery trumpet fills and solo in a driving vocal setting.

It's time to lighten up. The holiday season brings us lots of good music and good cheer, and Fuller's Christmas album is one that we can all enjoy.