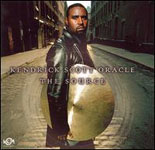 The first time I saw Kendrick Scott, he wasn't supposed to be there. Eric Harland was a no-show for the Terence Blanchard Sextet's 2003 gig at the Skidmore Jazz Institute (a summer program that counts Scott as an alumnus), so Scott filled in, and acquitted himself admirably. When Terence Blanchard's Flow tour came to Albany in 2005, three weeks after Katrina wiped out Blanchard's home, Scott was a permanent member of one of the best jazz groups I've seen to date. The show was breathtaking, and Scott's multi-faceted percussion skills played a big role.

When I heard Scott was releasing his first disc as a leader, I was purely psyched. Then I heard several members of Flow were featured on the disc, and my excitement doubled: Flow (Blue Note, 2005) remains one my favorite CDs, and I was convinced this lineup—combined with terrific talents like Robert Glasper, Seamus Blake, Lage Lund, and up-and-coming vocalist Gretchen Parlato—could deliver one of the best discs of this year. Then again, the New York Yankees' lineup is supposed to deliver championships every single season; they're in third place as I write this, and The Source is just as disappointing.

Pianist Aaron Parks, guitarist Lionel Loueke and bassist Derrick Hodge's exciting writing lifted Flow above the rest and energized Blanchard after years as Spike Lee's resident composer. Instead of tapping this great compositional resource, Scott locks his band mates solely into support roles. Loueke, one of this generation's most dynamic young guitarists, appears on only two cuts. Except for a depressing cover of Bjork's "107 Steps, Scott handles almost all the writing chores. And while Scott can sure put down a nasty groove when he wants—as he does on "Mantra and "Psalm —his pieces try to be too complex, and the results tend to meander.

The swirling opener, "View From Above, bodes well for the disc: The darting waltz gives the impression of a bird in flight, diving through the trees one moment and then hovering on a thermal the next. When Parks reprises "View as a stark solo-piano piece, that initial energy is nowhere in sight. Glasper plays a razor-sharp solo on "Mantra and contributes his hip-hop aesthetic to "VCB, but the latter tune is only two minutes long and screams for development. Parlato's nouveau-bossa "Journey is quite nice, but that's all it is. "Search for Noesis, Scott's duet with guitarist Mike Moreno, shows flashes of light and heat, but it begs the question that haunts this disc: Where's the beef?

Returning to the baseball metaphor, The Source lacks a big-time cleanup hitter. As the young players' writing energized Blanchard, it was Blanchard's home-run-hitting power that made that music jump. The rotating reeds of Blake, Myron Walden, and Walter Smith III aren't enough to blast through the disc's overall shortcomings. Like Joe Torre, I hope Scott learns from his mistakes and goes on to the musical victories I know he can achieve.