By Jakob Baekgaard
March 30, 2019
Sign in to view read count 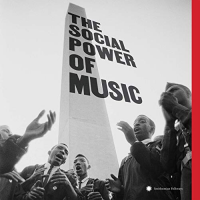 It could be argued that music has been around for as long as humans have walked on Earth. When we are born, one of the first things we do is cry and scream, and to calm babies down, lullabies are sung. As we grow up, music becomes the soundtrack for joy and mourning; the rites of passage in life are marked by wedding songs and funeral blues. We use music as a guiding light and a way to express what is inside us, but it's also a language that binds different communities together. Countries use music. Religions use music. Protest movements use music. Everyone needs a song to sing or listen to.

The enormous span of the social function of music is covered in an awe-inspiring box released by Smithsonian Folkways Records, simply titled The Social Power of Music. It consists of a 124-page book and four CDs covering more than eighty songs in a wide variety of genres and languages. This is truly folk music as it can be heard around the globe: Buddhist chants, spirituals, prayers, folk songs, dance songs, marches and blues; songs that address abuse of power and songs that reach to the sky; songs for celebration and contemplation; familiar songs by well-known names like folk-poet Pete Seeger and new discoveries like the Danish folk singer Inger Nielsen.

The four discs are divided into four different sections: Songs of Struggle, Sacred Sounds, Social Songs and Gatherings and Global Movements. Each section is introduced by a short, but substantial essay, followed by notes to each track. Most of the notes are rather brief, and yet every song note takes up a whole page of the book with plenty of blank space that could have been used for more information about the song. It feels like a missed opportunity, but that is a minor quibble considering the effort that went into creating this impressive document. There's a selected reading list for those who want to know more, and the attention to detail is reflected by the choice of typeface. The headlines are written with the typeface Martin, "a non-violent typeface inspired by the remnants of the Memphis Sanitation Strike of 1968."

Many of the songs on the box set are collective efforts, voices working together in choirs and groups, but there are also examples of strong solo recitations where the individual represents a community or a part of history. One of the most poignant moments is the the song "Why Need We Cry?" by Cantor Abraham Brun, a Polish-Jewish holocaust survivor, who sings a song of hope in defiance of the horror of Nazi fascism. Elsewhere, Lebanese musician Marcel Khalifé sings the mesmerising oud-ballad "The Passport."

The strength of the box is exactly that it embraces many different perspectives and seeks understanding rather than division. While Smithsonian Folkways has issued important collections of different genres, including the iconic Anthology of American Folk Music, The Social Power of Music is one of the most ambitious releases from the label in terms of its musical scope. It is a rich resource of folk music that speaks across languages and genres and gets to the core of the one thing we all have in common: We are all humans with hopes and fears, dreaming about a better world without injustice and a need to express our sorrows, joys and protests in song.