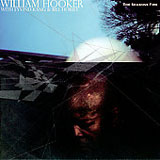 There's that iconic story about Elvin Jones, the man who altered the course of jazz drumming by seeking new sounds. Once at a gig in a bar as a young man, a customer came up to him and said, "Hey, make some noise." Relating the incident to Lewis Nash in a 1977 interview, Jones added: "People never understood that the drum is a musical instrument."

Anyone with open ears listening to drummer William Hooker's The Seasons Fire, with Eyvind Kang and Bill Horist, will understand that the drum is a musical instrument. And there's no doubt that Kang's boundary-pushing violin and Horist's guitar are as well. It may not be your grandfather's music, but maybe that depends on your grandfather.

As earnest and accomplished innovators, Hooker (who has played with Billy Bang, David Murray, David S. Ware and Sonic Youth's Thurston Moore, among others), Kang and Horist conduct their joint free jazz improvisations organically and the result is a fully engaging exploration. Each listener may hear different things in the music and interpret them—if interpret they must—also in their own way. What's undeniable is that there is much to be heard and experienced here, much of it riveting.

Within these seven works, performed live in Seattle on Oct. 20th, 2001, these seasoned experimenters elicit a wide vocabulary of sounds and sensations that words can only partially express. The entire outing feels elemental and fresh, a poetic stream of constantly evolving and shifting variations of personally-expressed contemporary music, unpredictable and thrilling at times. With its wide variance of changing moods, rhythms and melodic strains, there is not a dull moment in the mix. If there is one reservation to be had, it's that this moving experience ends too soon.