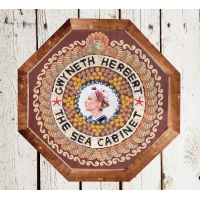 The Sea Cabinet is singer-songwriter Gwyneth Herbert's sixth album release, her first since All the Ghosts (Naim, 2009). That album's Herbert compositions drew comparisons with such iconic British songwriters as Ray Davies and Paul McCartney—comparisons which were spot-on but for the crucial fact that Herbert unfailingly sees the world from a woman's point of view—while the elasticity and phrasing of her vocals were rightly likened to Joni Mitchell.

As its title suggests, The Sea Cabinet brings together a dozen songs which are linked to the sea in various ways. Most of them are new, with only the fragile beauty of "Lorelei" recurring from the 2009 album. While not exactly a concept album, The Sea Cabinet centers on the imagined story of a woman who walks the beach every day alone. Consequently, it has a consistency and unity of sound and tone which mean that it hangs together well. Herbert's music has sometimes been labeled folk-jazz, but of this album she herself says she would "put the record on the shelf marked bluesyfolkypoppyjazzystorysongs."

Herbert wrote most of these songs while on an artistic residency at Aldeburgh Music on the Suffolk coast, a time when she took midnight, seaside walks, visited the drowned village of Dunwich and made friends of the local fishermen. Such experiences permeate the resulting songs, several of which could be taken for traditional folk songs rather than new compositions. Imaginative settings and accompaniment prevent the songs from sounding too folky and add variety—in fact, that half-serious description from Herbert successfully sums them up.

Those already familiar with Herbert's music will be reassured to know that The Sea Cabinet continues the rich vein of form she has displayed on her recent albums; those not yet familiar with her can start here without fear of disappointment.